Colombian activist thanks CUPE for help in “keeping us alive” 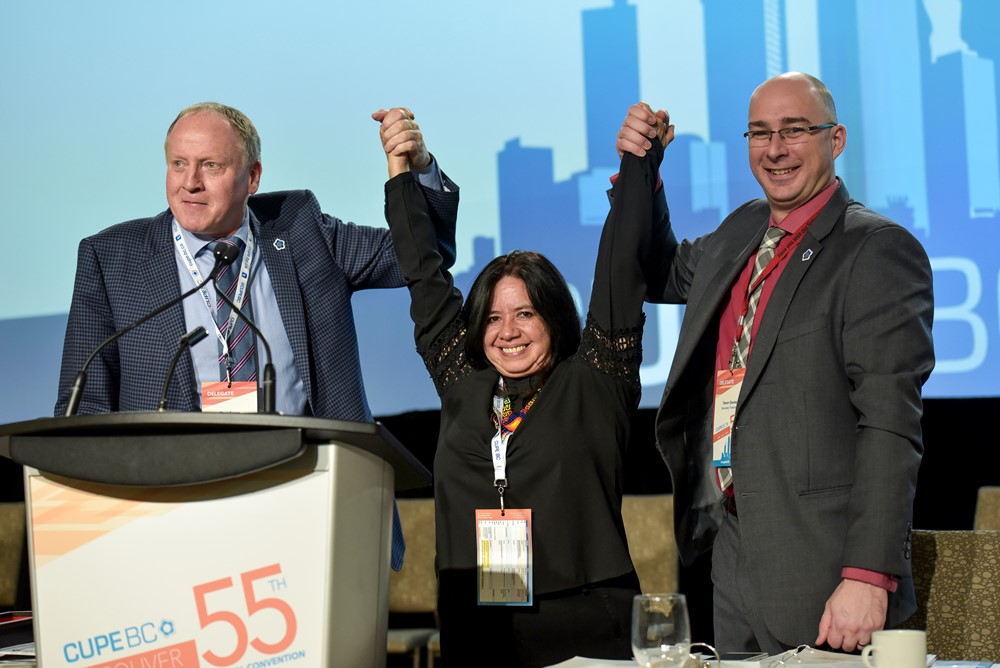 VANCOUVER—International guest speaker Berenice Celeyta moved delegates at CUPE BC’s 55th annual convention Thursday with a passionate address in which she thanked the union for its continued support of human rights in her native Colombia.

Celeyta, director of the Colombian human rights organization NOMADESC since its founding in 1999, provided a sobering update on the peace process in her country that began in 2016 with a ceasefire agreement between the Colombian government and rebel groups.

Since the peace process began, she said, a truly just peace has been elusive and 285 community leaders and social justice activists have been assassinated.

“For many years, our communities have been struggling to make social justice a reality,” said Celeyta, who for years has been the subject of death threats and harassment. “But the process of increased corporate interest in the country actually began with the peace process.”

Celeyta described how a series of free trade agreements beginning with Canada in 2010 have ramped up resource extraction activity by global corporations, leading to mass displacement and dispossession of land. One video she screened for delegates showed impoverished residents being evicted from their homes to make way for development.

“This global extraction taking lives from our community has no heart,” she said. “Capitalism has no heart. It’s because of capitalism that we’re living under these conditions of poverty and discrimination and exclusion.”

But not all the news is grim, Celeyta reported. Thanks to the support of CUPE and other unions, organizations like NOMADESC have been able to educate and empower communities affected by these evictions, giving people the courage to fight back and take mass collective action.

For example, she pointed to last year’s mass demonstrations in the community of Buenaventura, whose population had been victimized by structural racism and repression due to corporate activity in the area. The video she screened showed celebratory scenes of mass street demonstrations and solidarity as local residents occupied the streets.

“As this video demonstrates, they may cut down all the flowers, but they can never stop spring,” said Celeyta.

“After the First World War, the Second World War, and all the dictatorships in Latin America, what the people have always done is step out into the street. We will always be outside in the street with the people.”

Singling out retired CUPE leaders Barry O’Neill and Paul Moist, along with current leaders Mark Hancock and Paul Faoro, Celeyta thanked CUPE for its many efforts in helping to keep her community’s leaders—including herself—alive. She also issued an invitation to Hancock, met with enthusiastic applause by delegates, for the CUPE National president to visit Colombia and bear witness to her people’s struggle.

“To remember is to pass through once again by our hearts,” she said. “And when we remember what workers have done to survive and continue to struggle for the rights of workers, I remember you and the solidarity actions you have taken to make that possible.”

Faoro, thanking Celeyta for educating CUPE members with her courageous example, committed the union to its continued support for her efforts.