Connecting with our members never stops

As you read this issue of Public Employee, we’re well into the second year of the COVID-19 pandemic. While vaccines allow us to see light at the end of the tunnel, we’re still some distance from returning to “normal.”

Labour Day has always been one of my favourite days of the year. As the heat of summer begins to fade and the chill of fall approaches, Labour Day offers one more opportunity to get together with friends and family. And of course, it gives working people an opportunity to come together to reflect on—and […]

Information for CUPE members about COVID-19 and their workplaces 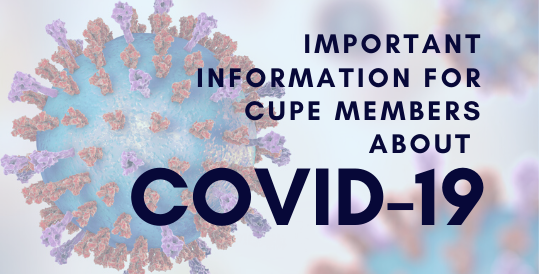 CUPE BC is here to support our Locals, and we are working hard with CUPE National’s Regional Office to ensure CUPE members are able to access the information they need. As you know, information on this subject is changing rapidly so we strongly recommend everyone visit www.bccdc.ca frequently for updates from provincial health officials.

Why we need a BC NDP majority government Welcome to the first edition of Public Employee for the 2020s. It will come as no surprise to regular readers that my first column for the new decade is about politics and how essential I believe political action is to the future of our union. It’s also […]

Why we’re with Jagmeet

The federal election on October 21 offers working people an opportunity to cast their ballot for an unambiguously pro-worker and pro-union leader and political party: Jagmeet Singh and Canada’s NDP. That would be the best answer to Justin Trudeau who, as Liberal leader in 2015, campaigned on an ostensibly progressive agenda but ended up delivering […]

Labour Day—to know where we need to go, we must remember how we got here

While we all look forward to the Labour Day weekend, and think of it as the “final weekend of summer,” I think it’s important to take some time to remember the origins of this holiday that celebrates the contributions of working people.

For CUPE BC, 2018 was an amazing year. The first full year of a BC NDP government that’s working to fix the damage done over 16 years of right-wing BC Liberals in power in Victoria; a historic referendum on how we vote; and impressive growth in CUPE that saw our B.C. membership swell to 92,000, […]

A model for fairness

Why I’m voting ‘Yes’ for proportional representation Sometimes it seems like there’s an election on the horizon every time I sit down to write my column for Public Employee, and this issue is no exception. Not only do we have local elections in every community in the province within days of this magazine arriving in […]