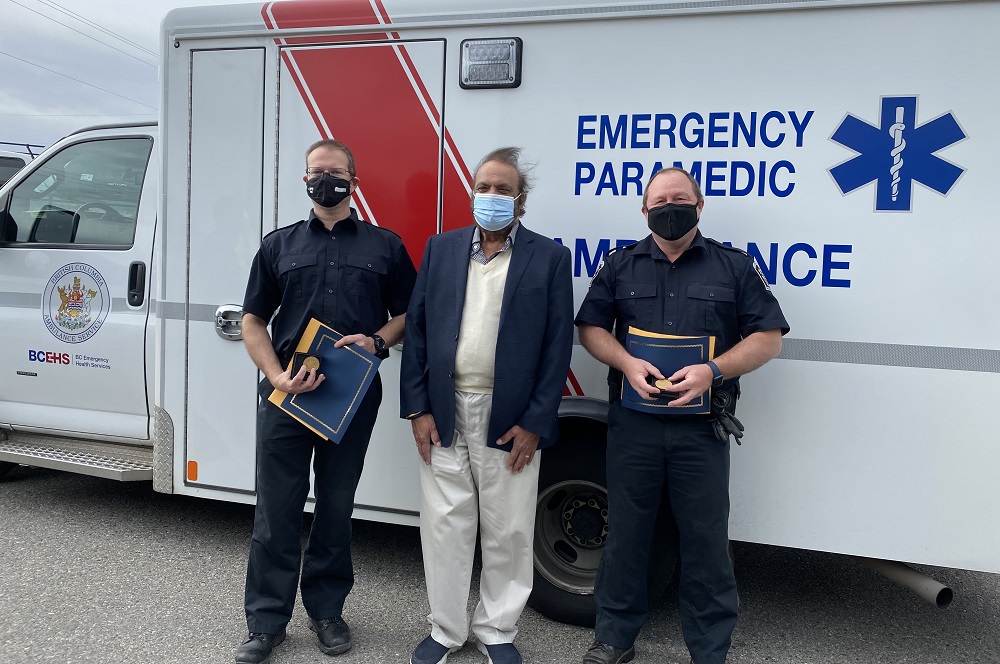 SUMMERLAND—Two bylaw officers who are members of CUPE 1136 (Summerland Municipal Workers) are being lauded for their quick response and use of skills that helped save the life of a man who suffered a heart attack this summer.

Darren Krell and fellow bylaw officer Dan Maja were visiting Range Rider Canopies in Summerland on June 21 when the company’s owner, Al Klar, had a heart attack in his office. Krell and Maja sprung into action immediately, checking for Klar’s pulse and calling 9-1-1 before quickly beginning cardiopulmonary resuscitation (CPR) with chest compressions. Ambulance paramedics arrived shortly afterward and, after using an automated external defibrillator (AED) to keep Klar alive, brought him to hospital where he received medical treatment and recovered.

In an interview with the Vernon Morning Star , Klar thanked Krell and Maja for saving his life. The local ambulance service nominated the two for the Vital Link award, recognizing their timely and successful use of CPR.

Thankfully, Summerland’s bylaw officers are trained in CPR, so the two CUPE 1136 members were able to assist.

“Summerland has got a really good program for first aid training,” says Krell. “Probably two thirds of our members are now trained. I’d like to see other employers do that, too, because you never know who you might have to save. It could be anyone—a member of the public or your co-worker.”

Krell, who’s had first aid training for 25 years—he also works as an arena ice maker and Zamboni driver—adds that he never had to use CPR until this summer’s incident: “I’ve used first aid at the arena before, but it’s mostly been for broken legs or collar bones, things like that.”

The same goes for Maja, who says he’s done incident reports for minor wounds and abrasions after slips and falls but never had to do CPR.

“It just goes to show how important it is to recertify, because you never know when you’re going to need it,” says Maja, who started work in Summerland eight months ago after serving 22 years as a bylaw officer in the City of Kelowna, where he was a member of CUPE 338.

Krell, a former president of CUPE 1136, is still active in the local as a member of the bargaining committee. Maja sits on the joint occupational health and safety committee.