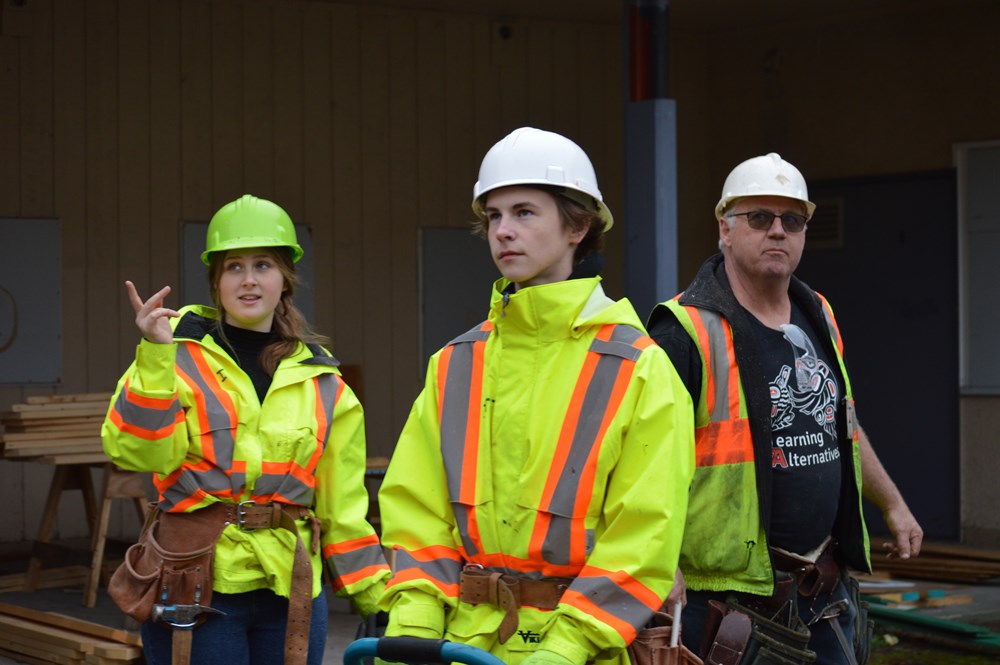 The initiative began when Nanaimo School District agreed to the union’s suggestion that trades members rebuild a portable that was in rough shape. At the Local’s recommendation, the successful project morphed into an opportunity to expose students to the trades. Students began renovating portables in January last year and are now starting their third one.

CUPE 606 member and carpenter Steve Fielden is the foreman who runs the popular program with support from other CUPE 606 trades workers. He works alongside teacher Martin Pakosz and CUPE 606 education assistant Deborah Tonn, who have seen the alternate program grow a lot over the past five years.

Tonn, the program’s EA since the beginning, says she enjoys seeing how students have embraced the program.

“Sometimes they maybe didn’t fit in the mainstream or had a little trouble finding help for their academics,” says Tonn. “This seems like a perfect fit for a lot of kids where they get half a day of academics, but they also get to go outside and burn off some steam – lifting lumber and banging nails.”

“The program works really well,” says program teacher Pakosz, adding that the unique program has great community buy-in. “It’s great for our district, for CUPE, for the NDTA (Nanaimo & District Teachers Association), and it’s great for students. These portables go out on site and it’s our kids who built them.”

The program’s trades focus is electrical, plumbing and carpentry. Program students can get right through to graduation while taking advanced academic programs through the district’s learn-at-home program, Island Connect Ed. Between 85 and 90 per cent of students in the program end up taking courses in town at Vancouver Island University.

Fielden, who sits on CUPE BC’s Skilled Trades Committee, supports the provincial Women in Trades training program whose goal is to make the workplace more welcoming to women and to increase the number of women working in trades. The district approached Fielden about doing an all-female course and he welcomes that possibility in the future. Another future option could be building a new portable “from the ground up”.

Discussing his role in the program, Fielden says patience is important. He typically explains everything to students at the beginning of a project so they can figure out the building process on their own, then steps in when needed. Students also learn when taking apart the old portables. For example, things may fall apart because they weren’t originally built using enough nails.

“I remind the kids lots: wear your safety glasses. Wear your gloves,” he says.

A student in her third semester with the program says she appreciates the head start it gives her in entering the trades.

“I’m definitely going into the trades – 100 per cent,” says Raquel. “I probably wouldn’t have felt the same way if I was at regular high school – the Intro to Trades program is amazing.”

Fielden adds that he hopes other districts will emulate the program.