Last night, long-time CUPE 1936 activist and local leader Michael Lanier passed away. “I’ve known and worked with Michael for many years, and I was shocked to learn of his passing,” said national president Mark Hancock. “In all his years on the CUPE BC executive board, Michael was always there, always ready to be counted […]

BURNABY – If it’s mid-January it must be time for another so-called “study” from the right-wing Fraser Institute urging the BC Liberals to slash pay and benefits for public sector workers and celebrating the low-wage, low-benefit economy that’s emerging after 16 years of BC Liberal mismanagement. The “study” is essentially a copy-and-paste of previous studies, […] 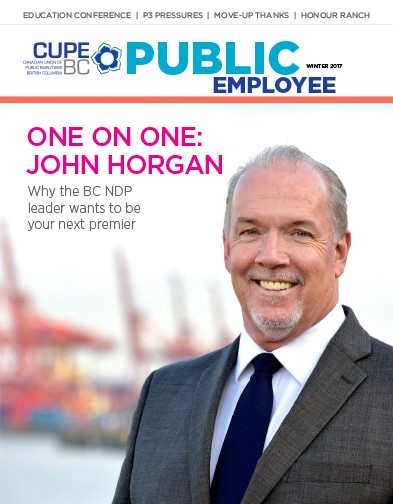 Communities minister raises stakes for May 9

Municipal wage control threat sets off alarm bells When this issue of Public Employee hits doorsteps, we’ll be only five months away from the next provincial election, and the stakes could not be higher—especially for CUPE members and our families.