My friends, This will be my final web column as president of CUPE British Columbia. As you know, on November 4 I was honoured to be elected as your national president. Though I have already taken on my new responsibilities in Ottawa, I wanted to say a few words to each and every one of […]

VICTORIA – CUPE 3886, representing workers at Royal Roads University reached a tentative agreement late last week. “The dedication and efforts of our bargaining committee are much appreciated,” said CUPE 3886 President Paul Allison. “We need to move away from provincial mandates that make collective bargaining so difficult.” The agreement follows the five-year provincial mandate. […] 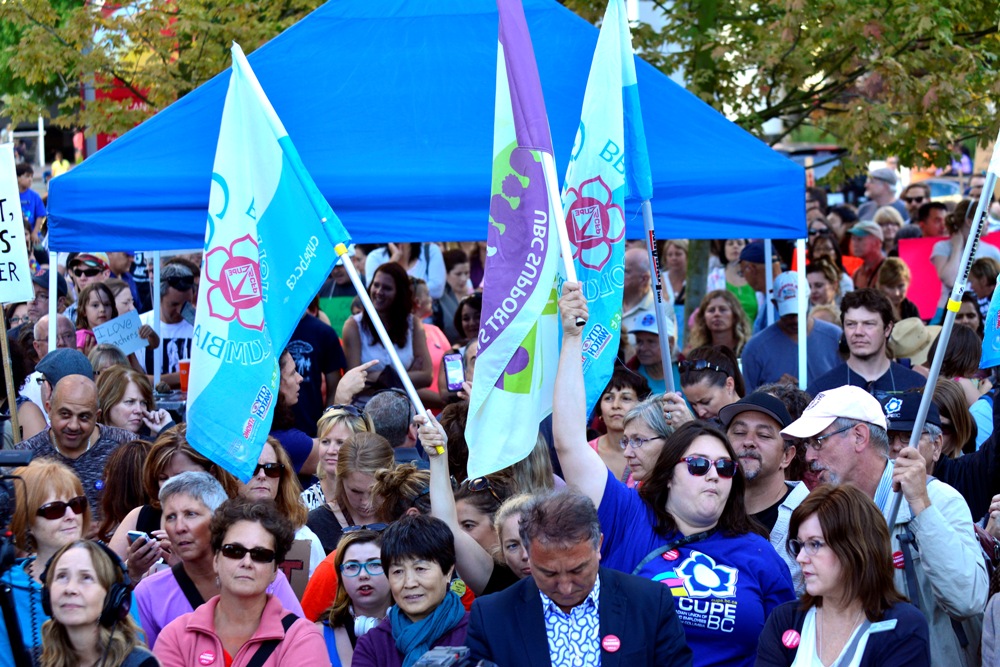 BURNABY—Today’s announcement by the BC Liberal provincial government that public sector workers, including many CUPE members, will receive a very small pay raise next year is welcome but does very little to help workers keep pace with the cost of living, CUPE BC Secretary-Treasurer Paul Faoro said today. “We’re glad that the approximately 48,000 of […]

VANCOUVER – On Friday, November 13 CUPE locals 1004 and 1936 representing workers at the PHS Community Services Society launched a unique collaborative exhibition called frontline. Featuring the artwork of members with a focus on the work that they do in Vancouver’s Downtown Eastside (DTES), the exhibit demonstrates the caring and creativity of this special […]

BURNABY — CUPE 23 member Chris Revitt and his family turned their enjoyment of choosing pumpkins at a pumpkin patch into a community event for neighbourhood children, who may be physically or financially unable to get to one. “I have three kids of my own and every year they visit the pumpkin patch. We realized […]

VANCOUVER – The Drug Users Resource Centre in the heart of the Downtown Eastside is marking 1,000 people now trained to administer lifesaving Narcan for drug overdoses. The Centre, staffed by CUPE Local 1004 and Local 1936 members, will hold a ceremony to mark the occasion on Thursday morning at 11am. As well as CUPE staff […]

Who let the dogs in? Surrey, that’s who

SURREY – The City of Surrey is bringing the Surrey Animal Resource Centre in-house with unionized city staff.  Surrey agreed with CUPE Local 402 that staffing the centre with CUPE workers will optimize customer service and provide excellent animal care. The two sides have negotiated a letter of understanding that the centre will be staffed […]

BURNABY – The winners of CUPE BC’s Environment All-Stars Contest have been selected and we can all benefit from their innovative ideas.  The contest was open to all CUPE members in B.C. as part of an effort to highlight creative projects that support the environment. The results engage and celebrate CUPE members who have shown leadership […]

How not to invest in public infrastructure

The following column from Mark Hancock ran in the Vancouver Sun on Monday, November 2. When Prime Minister Justin Trudeau announces his cabinet this week Canadians will watch to see who will be appointed to deliver on his key election commitment to invest in public infrastructure. While the “who” will be important, so too will […]