The time for complacency is over: anti-racism forum 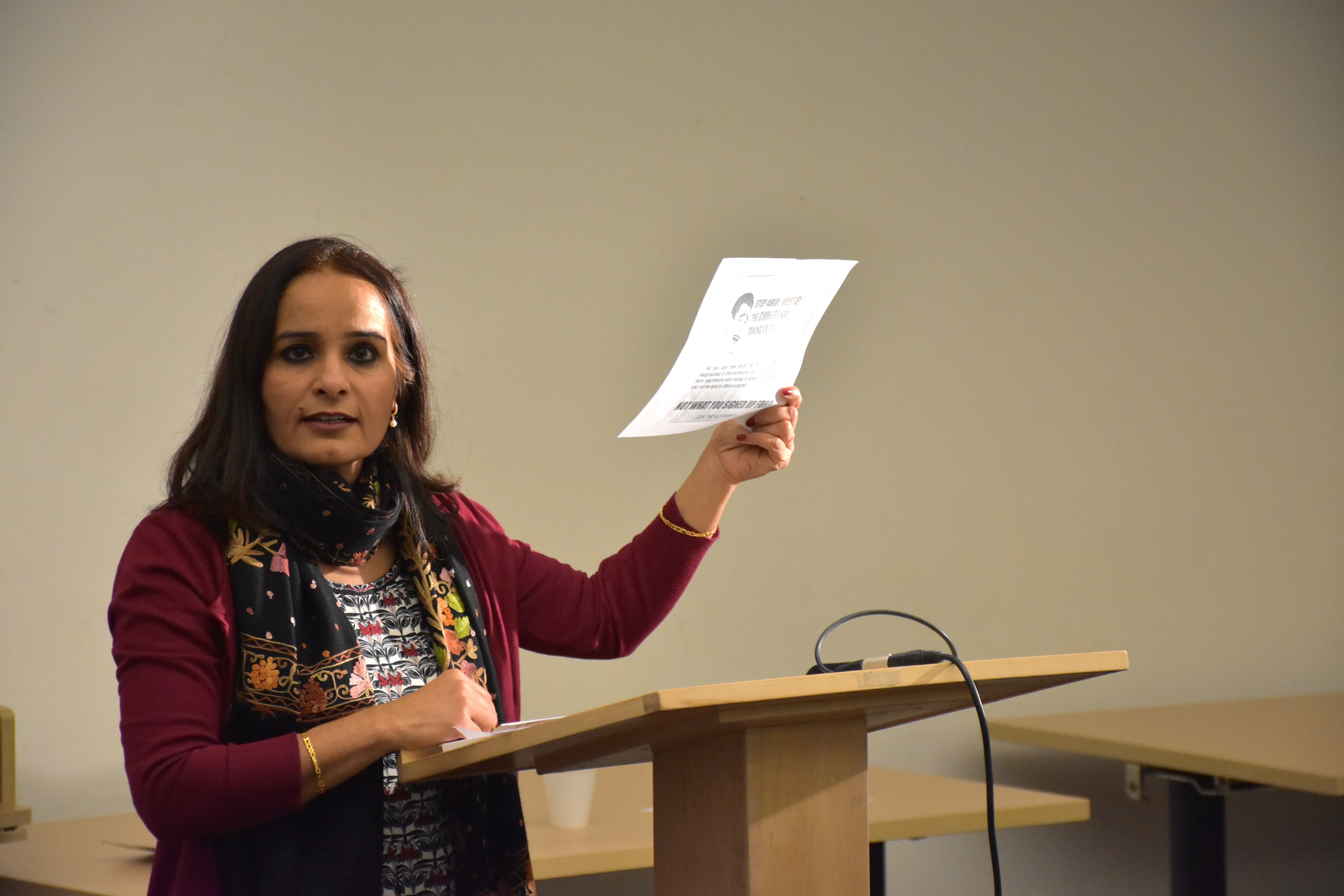 SURREY— In the wake of Donald Trump’s successful run for the U.S. presidency, the rise of racist hate groups and white supremacist propaganda can only be stopped with strong, united opposition at the community level, various speakers told a public forum held on December 10.

Singh, setting the tone, noted how Trump’s election win has empowered organized hate groups even beyond U.S. borders. Citing recent cases of racist flyers distributed in Surrey, Richmond, and elsewhere in B.C., she said the increase in bigoted incidents is alarming because it runs counter to the spirit of diversity and multiculturalism that has defined the Canada she knows and loves.

“Many of us are concerned that nothing will be done about it, and that’s why I wanted to start this dialogue—so that we can find ways to stop it,” she said.

Ricci, chair of the BC Federation of Labour’s indigenous caucus, raised the theme of truth and reconciliation in urging those concerned about racism to make their own commitment to action.

“There’s always more work to be done,” she said. “Some of you have the gift of voice, whether it’s speaking or singing. Others have the gift of organizing events like this one, which help to build movements and activism.”

Lanier, noting his status as an immigrant from the U.S., recalled the inspiring leadership of Martin Luther King during the 1960s, the sense of rage that consumed American cities during that period, and how progress made on civil rights and equality can easily be reversed without a strong commitment to social justice.

Government has a responsibility

Harinder Mahill, the final chief commissioner of the BC Human Rights Commission, lamented the Gordon Campbell-led BC Liberal government’s decision to abolish the Commission in 2002.

“What a difference having it would have made in the investigation and education process,” he said, referring to the public response to hate crimes in B.C. over the last 14 years.

“The Liberals said it was costing too much. It was $4.5 million a year. That’s a dollar per citizen. Why can’t they spend one dollar per person on human rights issues when they can spend so many millions on advertisements?”

Community activist Imtiaz Popat, who produced a documentary about the 1998 murder in Surrey of Sikh temple caretaker Nirmal Singh Gill by five white supremacists, said that not enough is being done to prevent racist violence in B.C.

“I don’t think our hate crime legislation is strong enough,” said Popat, who has set up a Facebook group for the Pacific Coalition Against Bigotry. He said the Coalition is planning to organize a Surrey march against racism on Martin Luther King Day, January 15.

Bains recalled a time when an Indo-Canadian person couldn’t stop their car at a Lower Mainland intersection without someone in the car next to them rolling down a window to shout something racist.

“We’ve made some gains, no doubt, but racism never went away,” he said.

Racism as a union issue

Today, everyone knows that unions empower people by fighting racism. But Bains, recalling racist incidents at a sawmill where he once worked, illustrated that courageous stands against racism in the workplace can also empower unions.

“When our union shop steward took this to the manager, the manager said ‘You tell me who it is, and I’ll fire the son of a bitch—but then you’ll have to take the grievance,’” Bains recalled. “Well, no one took the grievance, and that mill became the strongest union in the Lower Mainland, the most militant.”

Sims shared the sentiment of many in the crowd when she began her remarks with a question: “Racism…didn’t we do that in the Seventies? Isn’t that done—you know, a check mark off the list?”

The former president of the BCTF recalled moments from her life—emigrating from India to England as a ten-year-old with her family, being “the only brown” face in a society influenced by bigoted right wing politicians like Enoch Powell and Margaret Thatcher, moving to Canada in 1975 and embracing the multicultural model of society—to demonstrate that bigotry is more nuanced that we like to think.

“Racism is not something that exists only in white people,” said Sims. “Racism sits in all our hearts, in one way or another: things inside us that make us judge others by their looks, by their religion, by their way of life. At different times, I have been guilty of that.”

It’s up to each of us

Sims, wearing her teacher’s hat once again, gave the crowd some “homework” to take away.

“It’s always easy to talk about these issues with people who agree with us. It’s harder to talk to people outside our circles,” she said, challenging everyone in the room over the next ten days to talk to two different people a day, outside of family and close friends, about the impacts of racism on people and society.

Ranbir Johal, following up on Sims’s theme, shared some of the consequences of not speaking out against racism. A Punjabi language teacher at Kwantlen Polytechnic University and a theatre producer, Johal recalled being at a teacher’s meeting one day when a colleague she respected began talking about “the sin of homosexuality.”

“I was rendered mute,” she told the crowd, “and I didn’t go back to talk to her about it, so I’m really disappointed in myself. Any type of discrimination has to be spoken out about. It is a responsibility.”

After the forum, attendees signed a petition calling for the return of the BC Human Rights Commission. B.C. remains the only province in Canada without such a regulatory body.