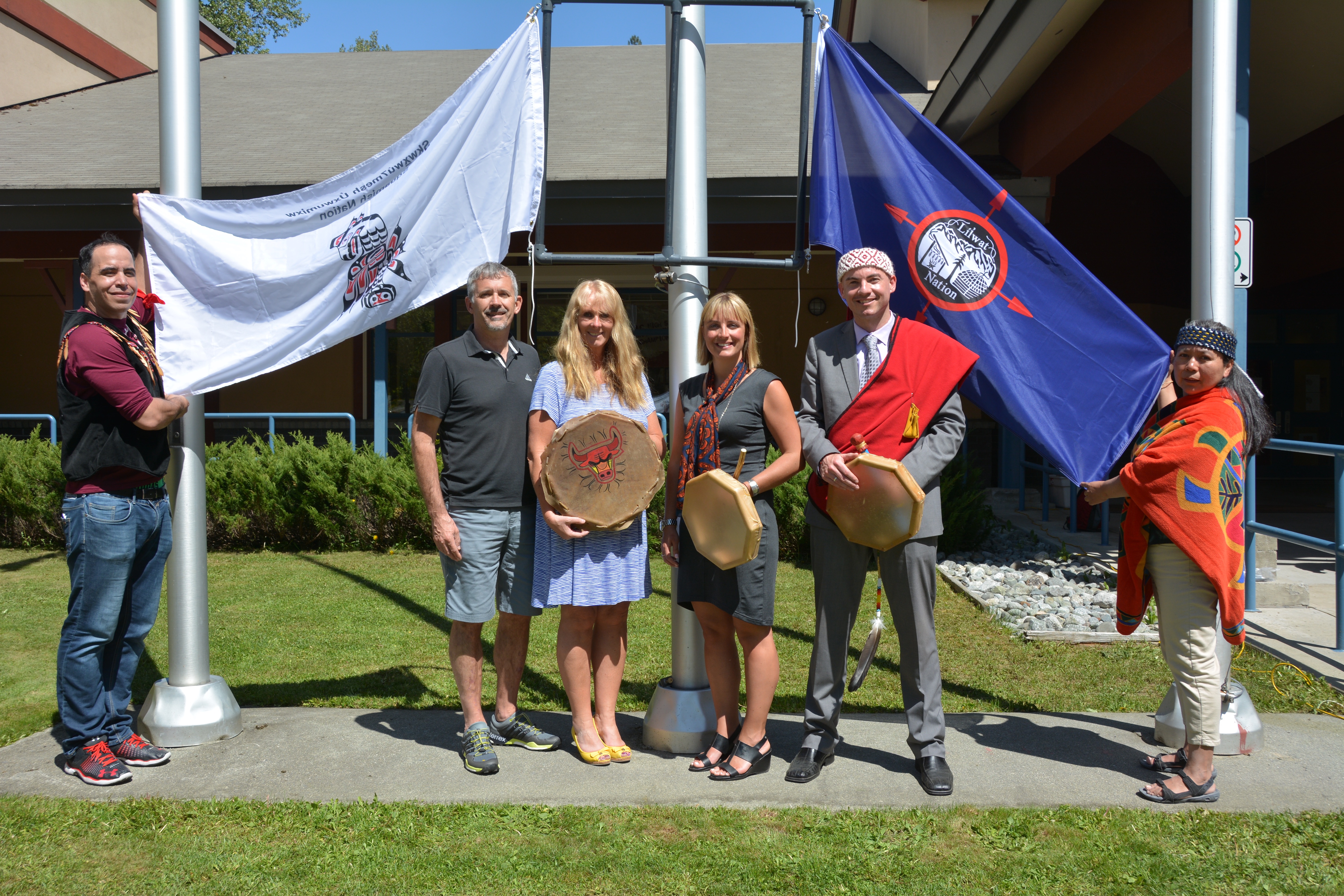 WHISTLER—History was made outside a public school here recently, as the flags of two First Nations communities were raised beside the Canadian flag in a symbolic display of cross-cultural cooperation in the local school district—an event CUPE had a role in making happen.

At a sun-drenched, mid-day ceremony held near the entrance to Whistler Secondary School on May 6, representatives of the Lil’wat and Squamish First Nations, along with those of School District 48 (Sea-to-Sky), presided over a symbolic flag-raising that participants described as an important sign of progress in the recognition of aboriginal communities as equal partners in B.C. education.

Members of both First Nations, appearing in traditional ceremonial dress before a crowd of about 75, offered prayers of gratitude with drums, followed by a pipe sharing, before the two First Nations’ flags were raised on the school flagpoles.

Along with Whistler Secondary and district representatives, the Lil’wat and Squamish speakers thanked the aboriginal leadership team, students and staff for their work in organizing the event. After the ceremony, a shared lunch was followed by an intercultural sports competition in the school fields.

“The significance of the event is that we are teaching our children fundamentals of how to be with each other—and that there’s a way we can do it that has deeper connection and meaning that makes us stronger,” said CUPE 779 member Kiyoshi Kosky, an educational assistant who advocated for the flag-raising at the school district and was part of the organizing team for the event.

CUPE 779, which represents K-12 support staff in the Sea-to-Sky school district, endorsed the event at its April 22 AGM.

“With the flag-raising,” noted Kosky, “we are honouring each other and making stronger relationships to govern together in a way that says we’re equal with each other at the table in decision-making and collaboration.”

As of June last year, Sea-to-Sky was one of 46 school districts throughout the province to have signed enhancement agreements with the Ministry of Education and local First Nations.

Respect, trust are the key

Such agreements require a high level of respect and trust in order to function—and that’s how this event was able to happen, said Kosky.

“The CUPE staff, administration and the school district, as well the teachers and our First Nation partners—the Lil’wat and Squamish Nations—have an active role with each other as a result of signing the enhancement agreement,” he said.