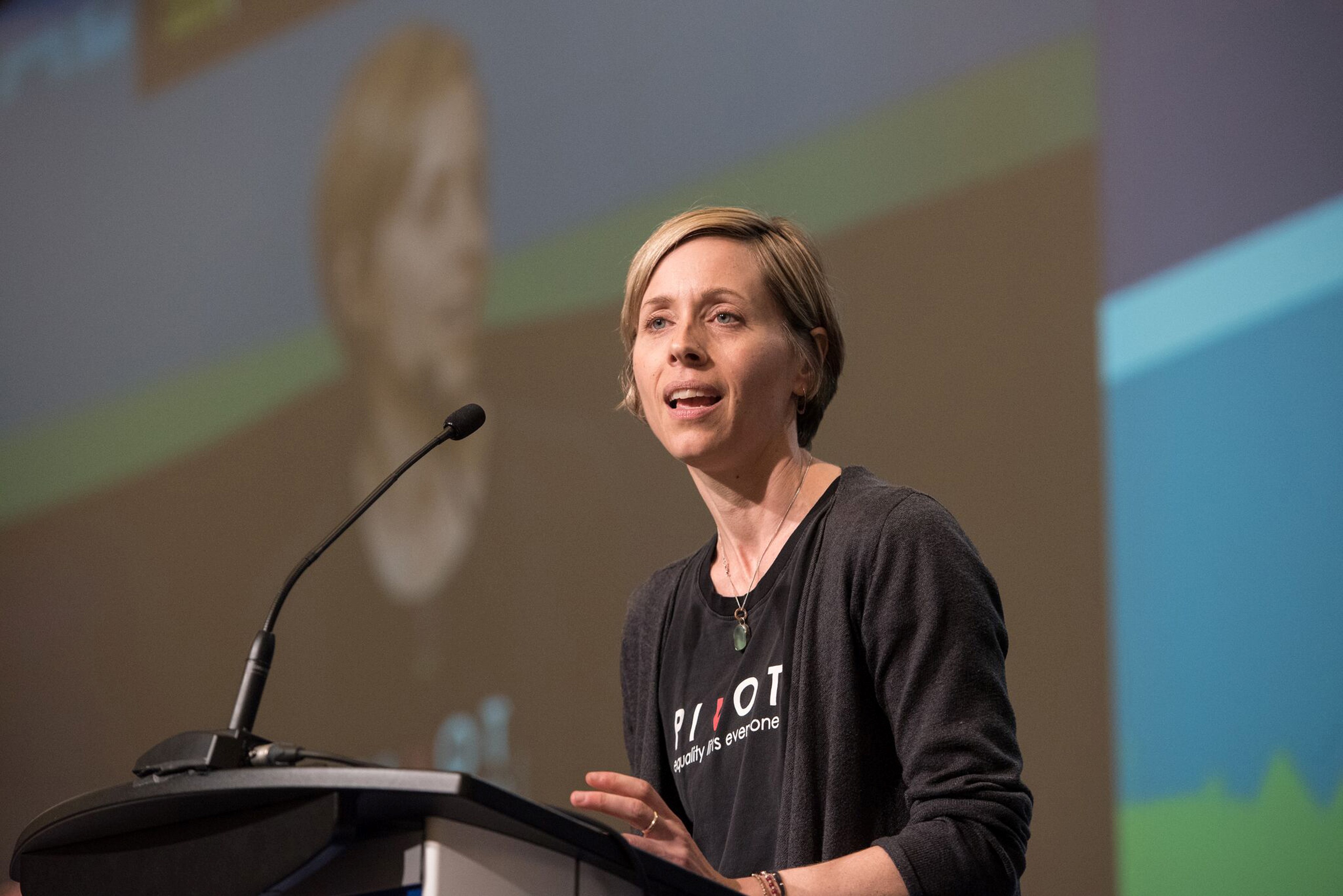 — often in concert with each other, Pivot's executive director Katrina Pacey told delegates on Friday.

In her convention address, Pacey drew parallels between the work CUPE and Pivot do, noting that her organization's relationship with CUPE has always been strong.

"The way that you bring voice and power and strength to workers, and you provide a vehicle to amplify those voices and tell those stories – you make sure that people have advocacy – to bring a fight that they might not otherwise be able to bring," said Pacey, "That's what we do, too."

Pacey opened by presenting a short film about Bobbi – a Downtown Eastside (DTES) resident whose story embodies many of the issues Pivot addresses on behalf of marginalized communities throughout the province.

"As a woman struggling with poverty who lives with mental health issues, as a woman who uses drugs, who has been incarcerated and suffered torture and violence at the hands of police," said Pacey, "Bobbi is a living intersection of all the issues and injustices that Pivot is working on."

Pivot began in 2001 as an organization fighting for human rights in the DTES, during a "very dire public health emergency and a profound human rights emergency." It has been providing justice and human rights protection to vulnerable and marginalized clients for sixteen years.

Major Pivot victories include helping to establish North America's first sanctioned safe injection facility for drug users in the DTES; representing street-based sex workers in two constitutional challenges that ultimately led the Supreme Court of Canada to strike down harmful prostitution laws; securing the rights of those with drug addictions to access prescription heroin treatment; and winning a challenge to harmful municipal bylaws in Abbotsford that displaced homeless people and deprived them of necessary safety and shelter.

Pacey thanked CUPE delegates, members and locals for standing in solidarity with Pivot throughout the years. She said that CUPE BC also shares in the victories because of its long-term support in terms of the spirit we provide to their work and the support we provide to the issues Pivot works on.

Sadly though, the DTES is now dealing with a dire public health crisis. Being on the front lines of the DTES, Pacey and her colleagues see their friends dying every single day. Pacey said that, despite the hard work of Pivot, of human rights activists throughout the province, and of CUPE members, poverty still exists at epidemic levels.

CUPE BC supports Pivot through the Colleen Jordan Fund used for international solidarity work as well as for work in communities throughout B.C.