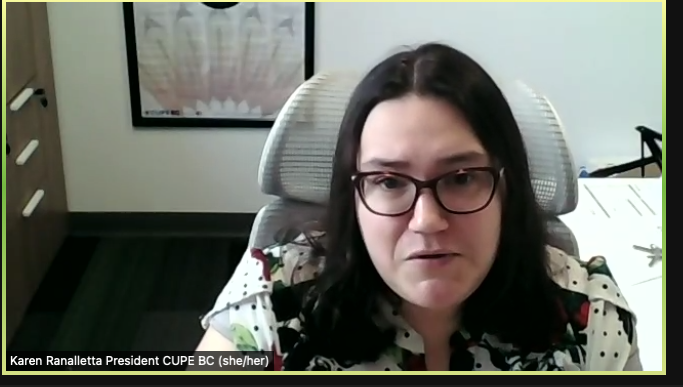 BURNABY—CUPE BC’s biennial “One Big Committee Meeting,” which brings together all the members of the union’s 21 committees for the first meeting of their two-year term, started yesterday online rather than in person due to COVID-19 restrictions. Nearly 200 committee members began two days of collective orientation, with each committee meeting separately in online breakout groups.

CUPE BC President Karen Ranalletta opened the event by reflecting on her own experience as a Pension committee member early in her working life, and said that serving on a committee is often the beginning of union activism.

“It’s not just about the technical information or the content of what you do on committees, though that’s important,” said Ranalletta. “But almost as important as all that for me was seeing how union members can work together to make our communities better and stronger.

“On the pension committee, I learned a lot about pensions and I was so inspired by everyone else around the table and their passion for pensions. That helped immensely in my work as a local president and was instrumental in my decision to run for the UBC Staff Pension Plan Board of Directors, a position I held for 4 years.

“I know that my experience with committees isn’t unique,” said Ranalletta. “So many great CUPE activists over the years have cut their teeth at the committee level and many of them have gone to on to run for positions in our union, and in elections at every level of government.  Not to set expectations too high, but my friend and former CUPE BC committee member Lisa Beare is now a B.C. Cabinet Minister!”

The event concludes today (Wednesday, October 20, 2021). Committees will continue to meet virtually for the rest of 2021, with a return to in-person meetings tentatively scheduled for 2022.