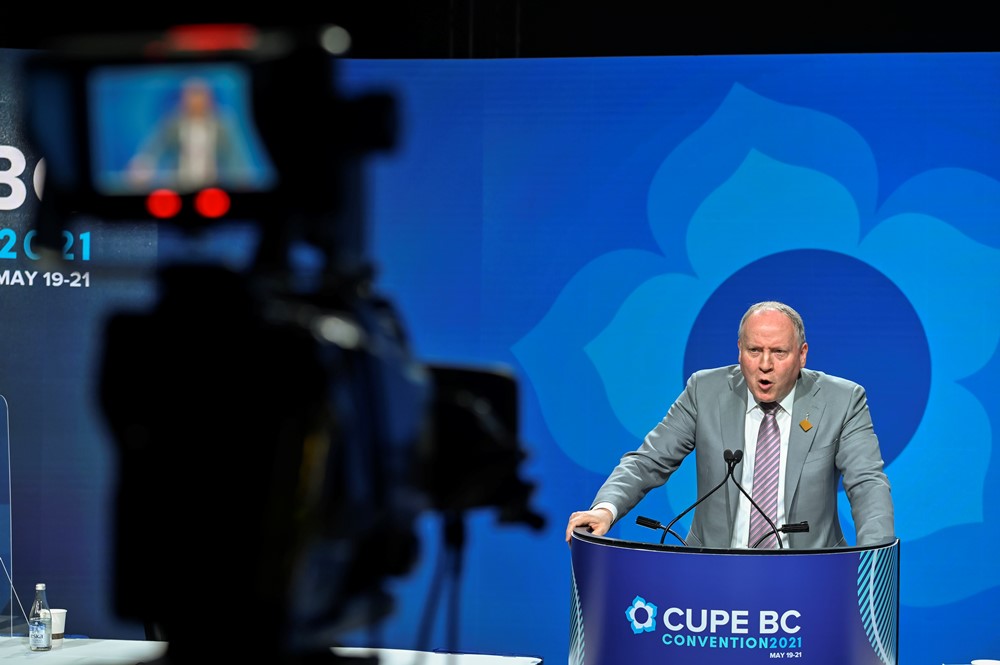 Faoro’s address focused on thanking CUPE members across the province for the work they’ve done to assist in the fight against the COVID-19 pandemic.

“At the top of our list of priorities was to do everything we could to keep CUPE members and their families safe,” said Faoro. “We have worked closely with the BC Federation of Labour, the BC Government, Provincial Health, BC Centre for Disease Control, local health authorities and other partner groups to coordinate our efforts. We listened and sought out guidance from experts, the doctors and scientists – and we ignored the armchair epidemiologists who sounded off on social media.”

Reflecting on his decades of union activism, first at CUPE Local 15, where he served 12 years as president, and then at CUPE BC, Faoro thanked the generations of union leaders and activists who helped him along the way. “I am so lucky to have met many amazing people early on in my Local 15 days who not only were great friends, but also helped me navigate the union movement and immersed me into progressive politics. People like Rick Gates, Mike Plunkett, Patrick Newton and Jim Green. While these wonderful people have now passed on – I will never forget them.”

Faoro pointed to CUPE’s organizing successes, both before and during the pandemic, which have seen the union grow from 82,000 members six years ago to more than 100,000 members today. “The most important part of that growth is not that CUPE BC has 20,000 more members; it’s that those 20,000 workers are building better lives for themselves because they’re union members.”