VANCOUVER – CUPE BC, CUPE BC’s library committee and many CUPE library workers from around the province participated yet again in this year’s BC Library Association’s (BCLA) annual conference.

“It is really exciting to see CUPE’s participation growing at this important conference,” said Karen Ranalletta, CUPE BC General Vice-President and chair of the CUPE BC Library Committee. “BCLA is a great chance to connect with our library members from across the province and to ensure that they know CUPE BC remains deeply committed to advocating for fully funded library services in public systems, academic institutions and in our public schools.”

CUPE BC, a platinum sponsor of the BCLA conference, hosted a hot topics session where CUPE BC President Paul Faoro gave opening remarks about the importance of public library services in communities and reassured delegates that CUPE BC is their partner and that they see advocating for fully funded and staffed libraries as a priority.

The CUPE BC library committee also had a booth at the tradeshow which provided an excellent opportunity to connect and visit with other library workers, and have conversations with management and trustees. They were able to showcase their adult and children’s book lists, their film list as well as their “I support my local library” buttons.

This year CUPE BC also facilitated a very successful conference session with more than 150 attendees that featured a panel discussion on “Measuring Value Beyond Walls” with a wide range of panelists to provide several perspectives on this topic including:

The panel encouraged BCLA delegates to think beyond quantitative measurements and to develop new ways to measure the social and moral impact library services have on communities.

Hemmingway provided a brief overview of the economic context in BC, discussing the impact that underinvestment in public services is having on communities and the true cost of failing to invest and provide community services.

Duncan discussed how library workers can more effectively lobby elected officials and stressed the importance of making presentations that focus on the social impact library services are having. Epstein touched on how library workers can engage in meaningful advocacy to ensure they are getting the funding support necessary to provide vital community services. She encouraged workers to place a greater emphasis on reporting outcomes and not activities and to consider ways to build an alumni program so libraries can measure the outcomes of their programs and services.

Carvalho discussed the impact libraries have for community agencies, and the strong relationship required to support vulnerable community members.

Sam Bradd was also in attendance to provide live visual notetaking of the discussion so delegates could take away a visual summary of the session. 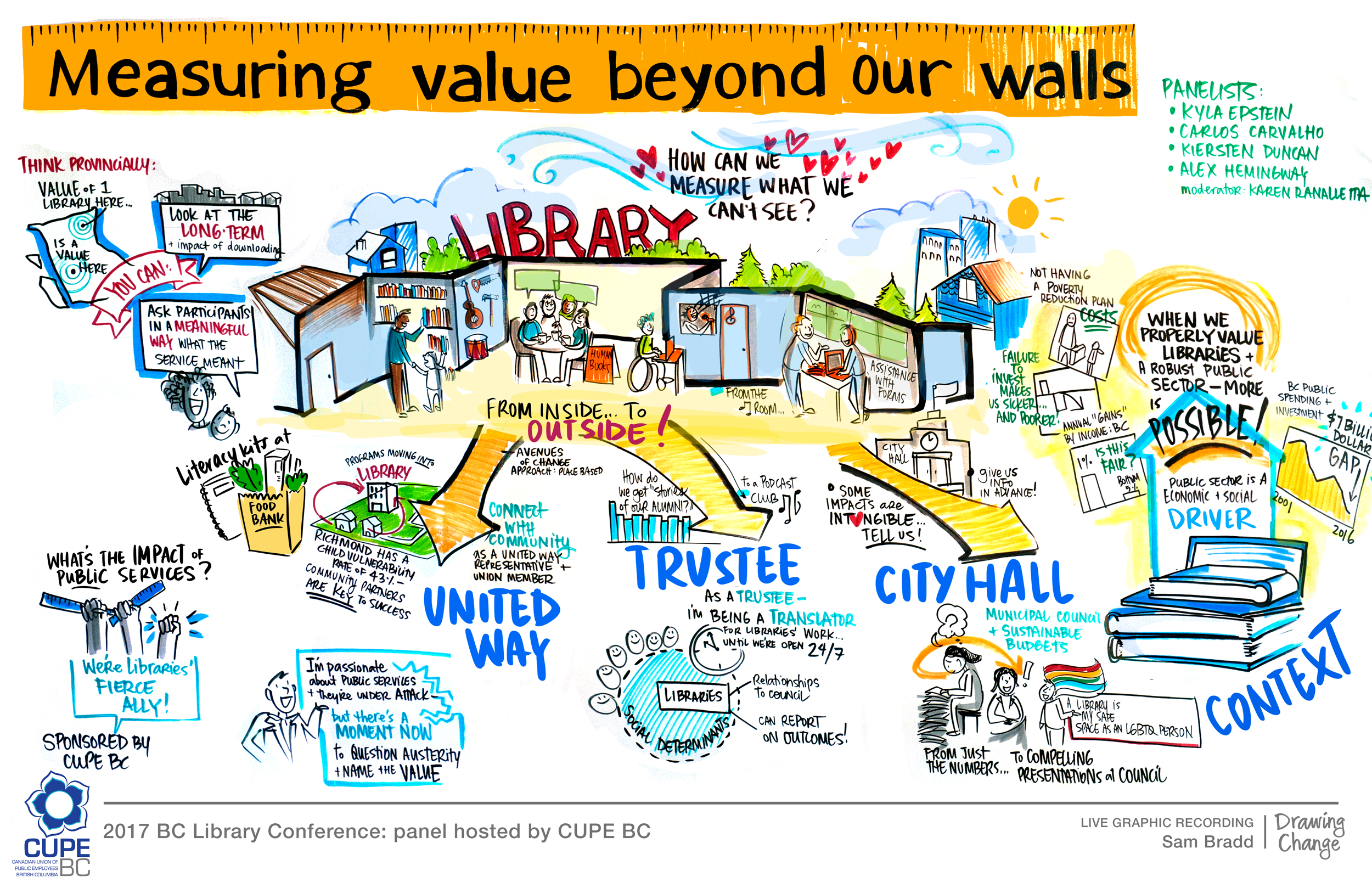