CUPE 409 to School Board: Reverse your decision on cuts 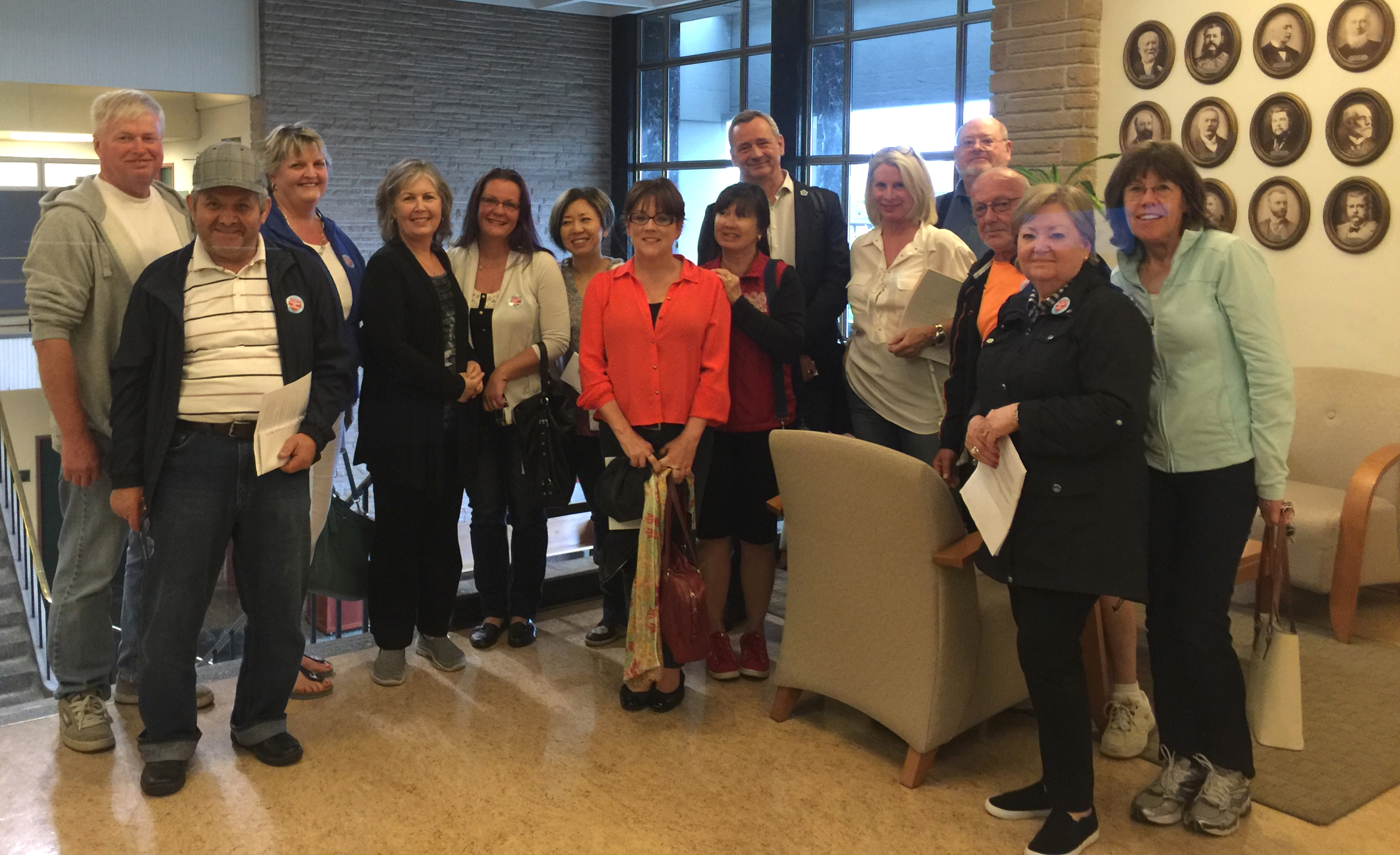 NEW WESTMINSTER – Support staff workers in K-12 packed council chambers last night at a regular school board meeting to talk
about the impact of unexpected cuts on students and schools.

Among the cuts announced recently, clerical workers are having their hours rolled back from 35 to 27 hours in large schools with more than 350 students; education assistant positions are being cut from 144 to 138, a huge drop from 157 in 2013/14; and daytime custodian positions are being dropped throughout the district. Childcare youth workers are also faced with layoffs. Their current responsibilities will shift from supporting students-at-risk at one location, to servicing more than one school with no additional hours added – despite all efforts to increase their hours and add positions.

“The daytime custodians serve on on-site health and safety committees at most schools because they are the ones who are looking after the health, safety and security of staff and students in our buildings,” said CUPE 409 President Marcel Marsolais, noting that a loss of these positions will compromise health and safety.

Marsolais said that the cuts to clerical, including the elimination of at least three positions at New Westminster Secondary School (NWSS), are based on a mathematical formula. It doesn’t consider how CUPE members support the needs of students, staff, parents and the public in our schools.

“We want to support students. At least, that’s what New Westminster use to be about – but administration appears to recommend that the board move us away from that,” said Marsolais. He added that the board received a presentation on the living wage last year but has yet to adopt a policy. The reduction in the weekly hours of work does not meet the basic living wage for these workers to support their families in our region.

Dismayed by the cutbacks

Cathy Magee, an executive member of the New West District Labour Council, told the board that she was dismayed to hear about the cutbacks and layoffs. She said that previously the budget was portrayed as one of stability and transparency that did not include layoffs. She thanked staff in schools who continue to stretch resources.

CUPE 409 member Charlene Ducholke, a secondary school bookkeeper, said she wasn’t expecting to speak last night but was shocked by the number of layoff notices given to clerical.

“The carpet in front of my office was almost worn out today because there were so many people going back and forth with layoff notices,” said Ducholke.

“We have far more reporting to the Ministry, our volume of students is huge, and international students are also included in NWSS student enrolment.”

Working in schools an ‘amazing’ experience

Michelle Sandwith managed the lunch program for eleven years at Lord Kelvin Elementary before taking on her current position as a chef at the high school teaching students in the cafeteria.

“I see amazing things there – from the teachers, the custodians, the secretaries,” said Sandwith. “I’ve seen secretaries work through their lunch or through their breaks, stay there long after, and bring in snacks for the kids because they’re hungry – all on their own.”

Although fiscal responsibility is important, she added, she hoped that the board would reconsider their decisions. “This has come out of the blue and without a doubt, it will impact our most vulnerable, our kids.  I guarantee they will feel it,” said Sandwith.

“Who’s going to deal with an overflowed toilet, garbage piling over?”, asked Manseau.  “I wipe the chairs and desks every day after students eat their lunch. I have 180 students from K to Grade 1 who are learning for the first time, so just picture what that bathroom looks like. I sweep the hallway floors three times each day, pick up garbage outside – I’m pretty sure I can’t do that at night.

“I take care of recycling and organic waste. I clean bodily fluids, glass and messes. I implement lockdowns and I set up and take down for concerts and assemblies.  I am security in the forefront and I’ve dealt with quite a bit this year.  I do the heavy lifting, repair desks and chairs. If a light is flickering and a child may have a seizure, I replace it.

“In winter we have a lot of sickness that goes through our school so I double back and disinfect areas. When we need someone to come from another school, it takes quite a lot of time for them to come over because they have to deal with the bridge.”

More questions for the board

Kathy Pearce, a secretary at Queen Elizabeth Elementary School, questioned the Board on its budget methodology.

“I am in the business of caring for 387 students, staff, and parents – soon to be 420 next year – plus a very large StrongStart Centre,” said Pearce.

She asked about the recent hiring of a buyer, more HR staff and a communications officer.

“Why is that more important than direct services to students,” asked Pearce. “This is the fourth year in a row where my co-secretary and myself have either lost our jobs or have had them threatened.”

Brief response from board

The Superintendent responded that changes, including a new middle school, have led to a reconfiguration of the district and how schools will be managed. He assured the audience that “there will be no cuts or layoffs.”

Marsolais, noting that cuts to clerical hours are a form of layoff, said that everyone may have a job at the end of the day but some positions will go from a living wage to precarious worker status.

“Stop going after CUPE members and balancing the budget on the backs of our members,” he said, “and instead go to the provincial government, who have caused these problems by underfunding public education for more than a decade.”