“Vote for the change you believe in”— Moist 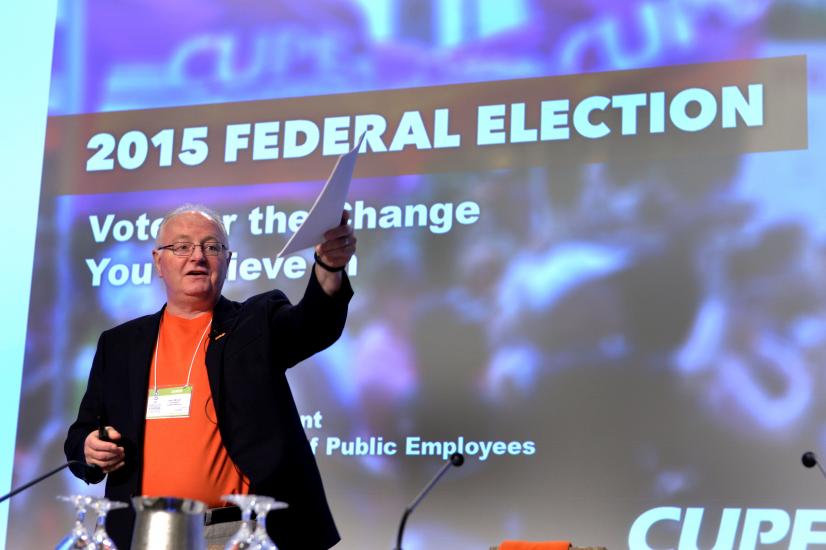 VANCOUVER - At a breakfast forum this morning, CUPE National President Paul Moist made a strong case for members to get involved in the upcoming federal election and elect a New Democrat government that supports working families. Delegates were reminded of the Harper Conservative’s abysmal record on pensions, health care, child care and workers’ rights.

“After a decade of Conservatives, middle class families are working harder and falling further behind,” said Moist.

Moist cautioned members not to be fooled by Harper’s spin on employment, saying that Canada has lost 500,000 manufacturing jobs – good paying unionized jobs with benefits and a pension plan, jobs that can feed a family.

Harper Conservatives have taken Canada in the wrong direction, he said. They’ve cut funding to 50 important social justice groups, such as the Status of Women of Canada, in order to silence them. Harper is eliminating environmental protections by reducing environmental laws in omnibus budget bills. Canada has lost our reputation for defending human rights and democracy.

The CUPE National president also pointed out how Conservatives have ignored issues important to working families. For example, they’ve blocked the expansion of the Canada Pension Plan and refused a new health accord, hurting health care funding in Canada.  Harper’s government has favoured tax breaks for the rich over child care.

Moist talked about Bill C-51, the anti-terrorism bill that tramples on civil liberties, noting that Thomas Mulcair is the only leader who took a principled stand and came out against it.

Trudeau was in full support of the bill but flip-flopped when he saw that more than 50 per cent of Canadians have serious concerns about this bill. And Trudeau is weak on CPP as well, noted Moist, saying only that he would consult with the premiers on the issue if elected prime minister.

“That’s not good enough.  He has no position on it,” said Moist.

Moist urged delegates to get involved in the upcoming election.  He shared the strategy to re-elect all incumbent NDP MPs and focus on defeating Conservatives across Canada. Delegates filled in pledge forms and a draw was held for door prizes.  Winners were Warren Williams, Tarsam Basi, Karen Ranalletta, Irene Bishler, Lisa Payne and Betty Dolaga.