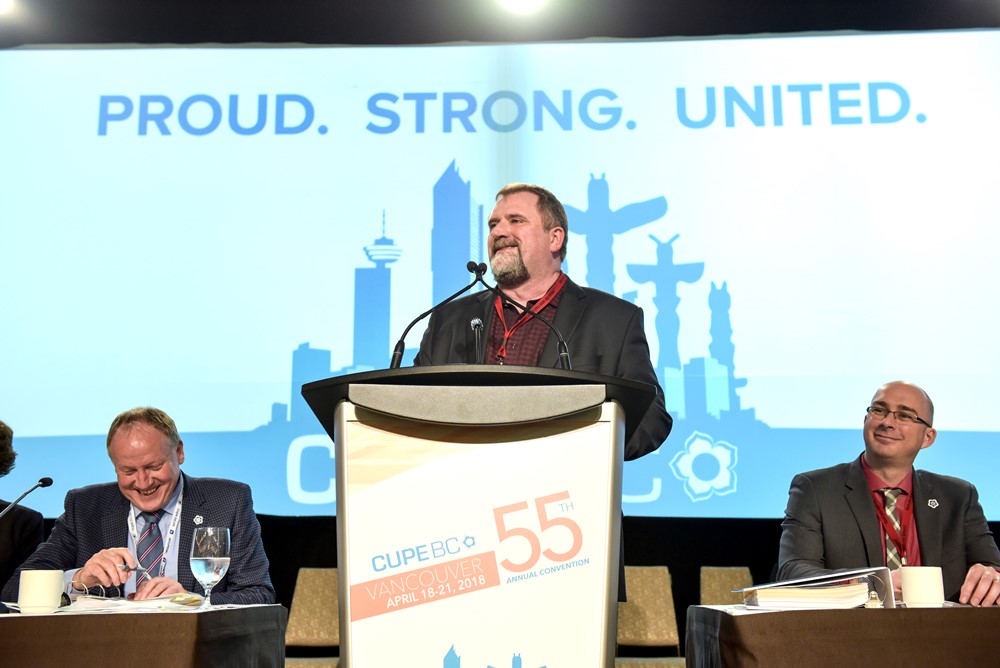 VANCOUVER - CUPE National President Mark Hancock delivered a wide-ranging and passionate speech to CUPE BC’s 55th annual convention on Thursday, telling delegates that CUPE’s renewed bargaining policy will help fight back against the rise of precarious work and violence in the workplace.

“I'm looking forward to working with that task force to review how CUPE works, to gather your ideas, and make some recommendations on how we might be a better, more representative union,” said Hancock. “In addition to creating that task force, our national convention approved a resolution to begin strike pay from day one of a strike or lockout so our locals are in an even stronger position at the bargaining table.”

Reflecting on the election of Premier John Horgan’s BC NDP government, Hancock said that the “last time I spoke to your convention, we were in the middle of an election campaign. And less than a year later, it's incredible to see the great work being done by our NDP government. After 16 years of BC Liberal rule, British Columbians are getting a reminder of the difference it makes when a government focuses on actually helping people.

“We're seeing groundbreaking investments in affordable child care, the elimination of the MSP, and much-needed new funding for K-12 and post-secondary education; and I know there is much more to come, including a rebalancing of the Labour Relations Board to restore fairness.”

Hancock announced that in the coming months, CUPE will be launching a national response on violence in the workplace. “While some employers try to turn a blind eye to this issue, we know that it's up to us to take a stand for our members, and for workers all across Canada who have fallen victim to violence at work. And it’s up to us to tell employers across this country that we will never accept violence in the workplace as just part of the job.”

Urging delegates to get involved in this October’s local community elections, Hancock said it’s essential that CUPE members work hard to ensure progressive candidates are elected across the province.

“With election finance laws changing, CUPE locals can no longer donate to candidates,” said Hancock. “And that’s okay. Because we have strength in numbers, and we know how to organize. So if we’re serious about electing worker-friendly mayors and councils, it’s going to take boots on the ground. Our boots.”

In addition to the local elections, Hancock urged delegates to support the “Yes” side in the upcoming referendum on proportional representation.