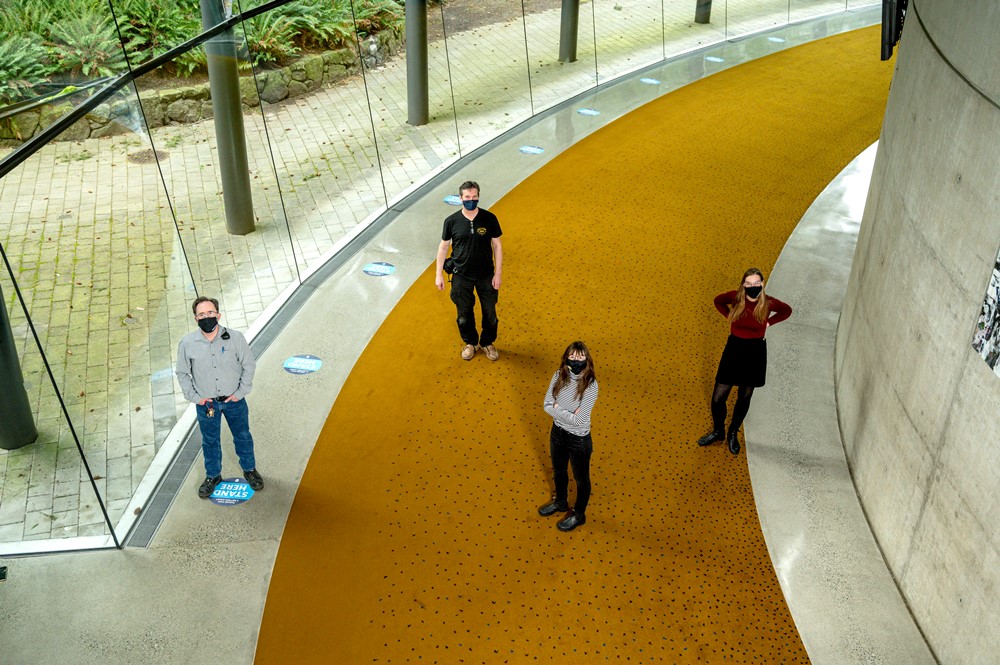 VANCOUVER—UBC’s West Point Grey campus, one of the largest university properties in the country, is eerily quiet. With most students and many staff working and learning remotely, the place seems empty. However, if you know where to look you can find dedicated workers on-site, facilitating UBC’s COVID adaptations and keeping campus operations running until a return to in-person classes is possible.

Most of these workers are members of Canada’s largest union, the Canadian Union of Public Employees (CUPE). While the sector has seen its fair share of layoffs, one can still find library workers, maintenance staff, technicians, trades people, support and frontline service staff, food service workers and many more at their posts. CUPE workers at UBC, and institutions like it across the province, are diligently working away until something resembling normal operations can resume in the fall.

When the house went dark

An often overlooked group of campus employees, whose work during COVID has been particularly challenging, are the CUPE 2950 members who staff UBC’s Chan Centre for the Performing Arts. As the institution’s primary music venue, which includes an 1159-seat concert hall plus two smaller performance spaces, the Chan Centre has felt the pandemic’s effects in the extreme.

“The stack of March 2020 Georgia Straight newspapers in the lobby really says it all,” notes Nadia Roberts, the Centre’s Events and Front of House coordinator. “One year ago, with almost no notice, we postponed or cancelled all the great shows we had lined up and simply shut our doors.” 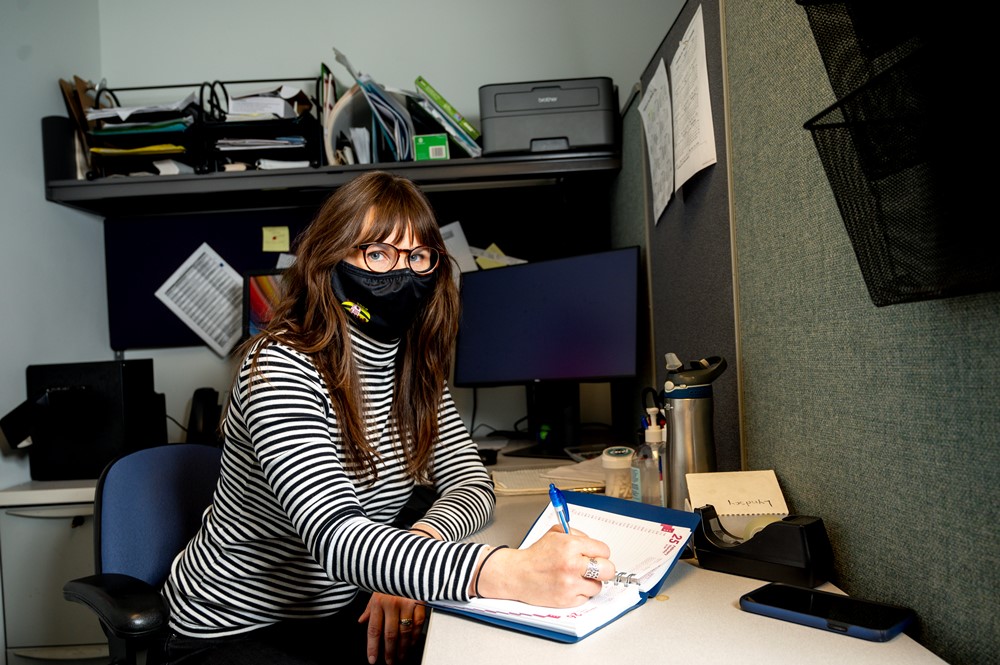 As devastating as the abrupt closure was on morale, Chan Centre staff were not about to let the pandemic undermine the facility or its importance to the arts community. That’s why, within days of the COVID-19 closure, CUPE members at the Centre were already adapting operations to allow performances to continue under the new guidelines. Through hard work and innovation—and, amazingly, after only twelve weeks—Centre staff had re-opened the facility, having converted all their systems (ticketing, booking, recording and broadcasting) to virtual platforms.

“While we were processing the many refunds for cancelled shows in the weeks following the closure, we were also completely re-inventing our ticketing platform to provide access to recorded and live-streaming performances,” says Ticket Office Supervisor Lyndsey Roberts.

The work done by Chan Centre staff to enable online ticketing not only helped the Centre continue earning revenue for community arts groups, adds Lyndsey Roberts, but also enabled other parts of the university to stay open.

“It was incredibly rewarding to see how our work to create an online ticketing system helped venues like the UBC Museum of Anthropology and the Beaty Biodiversity Museum safely schedule visitors and remain open during the pandemic,” she says.

The work to convert to online operations went far beyond virtual ticketing. It required a wholesale re-invention of the performing arts centre’s technical operations, and working with a local video production company to add new format options.

“From applying COVID protocols to multi-person technical work, to changing our lighting designs to accommodate video recordings, we re-invented nearly everything we did,” says Assistant Technical Director and Head Lighting Technician Andrew Riter. “We had to design, procure, install and master new equipment systems in a matter of weeks, when that work would normally take many months if not years.” 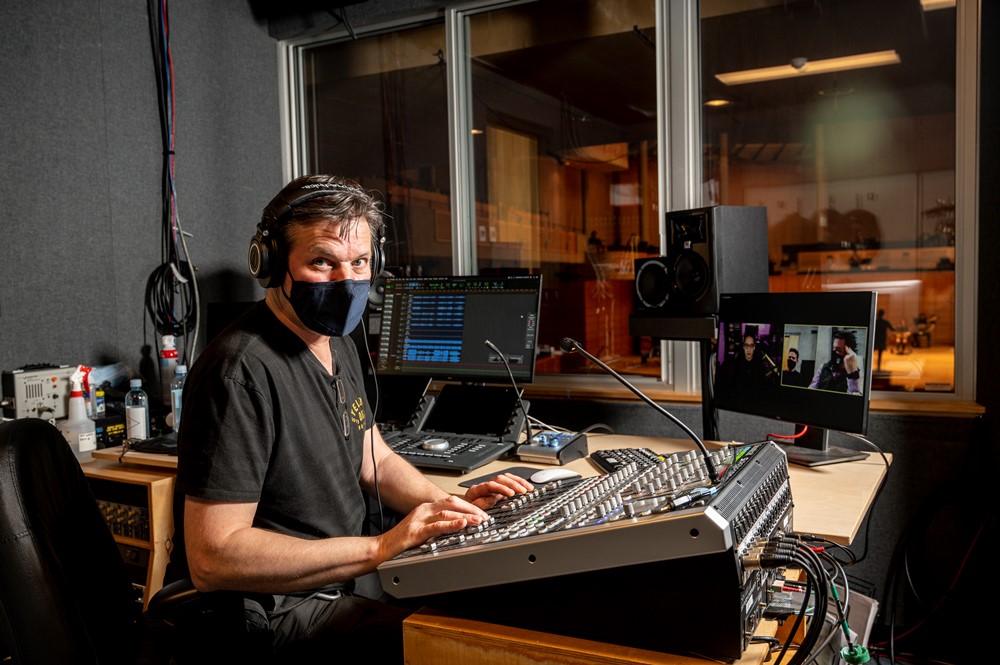 Head Audio Technician Lloyd Balser says it was challenging to find cleaning solutions both strong enough to kill the COVID virus and gentle enough not to harm sensitive audio equipment: “Sometimes it was the little things that caused the largest problems.”

Despite the hard work and condensed timelines, Chan Centre staff all agree that the effort has been worth it, pointing to the many members of the arts community who have benefited from the Centre’s continued operation. The place has never been busier, hosting a multitude of classes, rehearsals, live-streaming and recording sessions for the University’s School of Music in addition to its other user groups.

“Nothing can describe the sense of pride when we first heard music return to the space,” says Nadia Roberts, recalling the Centre’s initial hostings of performances by UBC students, Vancouver Opera, and the Vancouver Recital Society. “It is such a joy to see students here every day and know that, without the Chan Centre, their education would have been interrupted for at least a year.”

For Balser, the investment was about supporting the many people who rely on access to the arts for health and wellness. “Our work to ensure continued access to performing arts means that people can feel some connection to normalcy during all this madness,” he says.

Whether providing space for struggling arts groups or creating its own content through the Chan Dot Com performance series, the Chan Centre has been a bright light of hope in an otherwise dark year for the arts community. Thanks to a group of dedicated, highly skilled CUPE workers whose entire job is to remain in the shadows while others shine, the Centre’s COVID-time story serves as a strong example of how CUPE members across B.C.—both behind and on the front lines—are helping our communities make it through one of the toughest years in living memory.