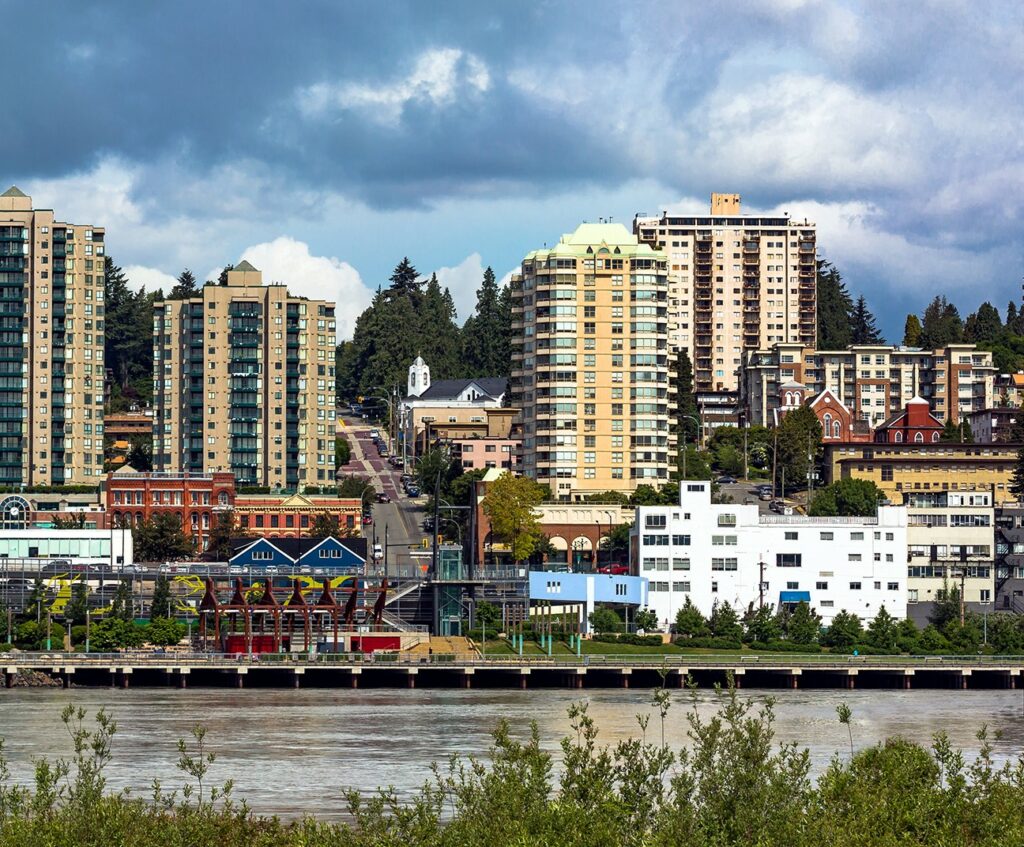 NEW WESTMINSTER—After several years of lobbying SD 40, CUPE 409 is pleased that the district adopted­­­­ the Living Wage policy on November 24.  “This is great news,” said CUPE 409 President Marcel Marsolais. “We want to make sure that people are paid appropriately. This is another example of unions benefitting all workers.” Marsolais praised CUPE […] 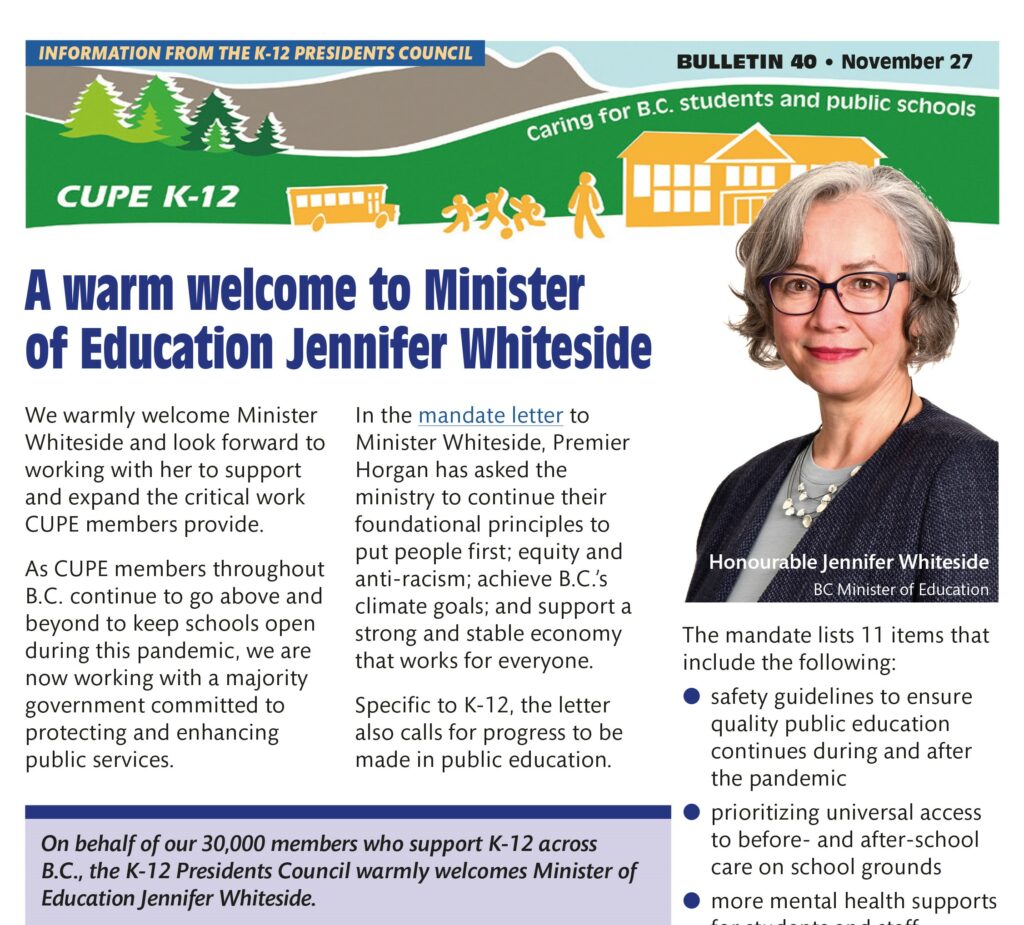 We warmly welcome Minister Whiteside and look forward to working with her to support and expand the critical work CUPE members provide. As CUPE members throughout B.C. continue to go above and beyond to keep schools open during this pandemic, we are now working with a majority government committed to protecting and enhancing public services.  […] 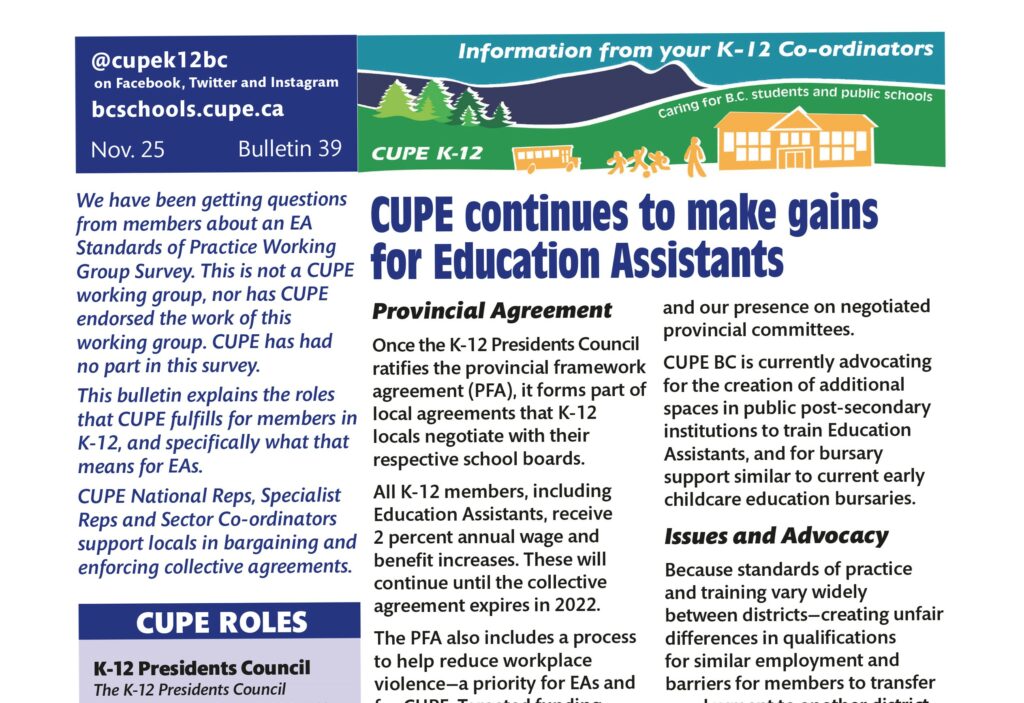 We have been getting questions from members about an EA Standards of Practice Working Group Survey. This is not a CUPE working group, nor has CUPE endorsed the work of this working group. CUPE has had no part in this survey. This bulletin explains the roles that CUPE fulfils for members in K-12, and specifically […]

A renewed call for international solidarity in Colombia 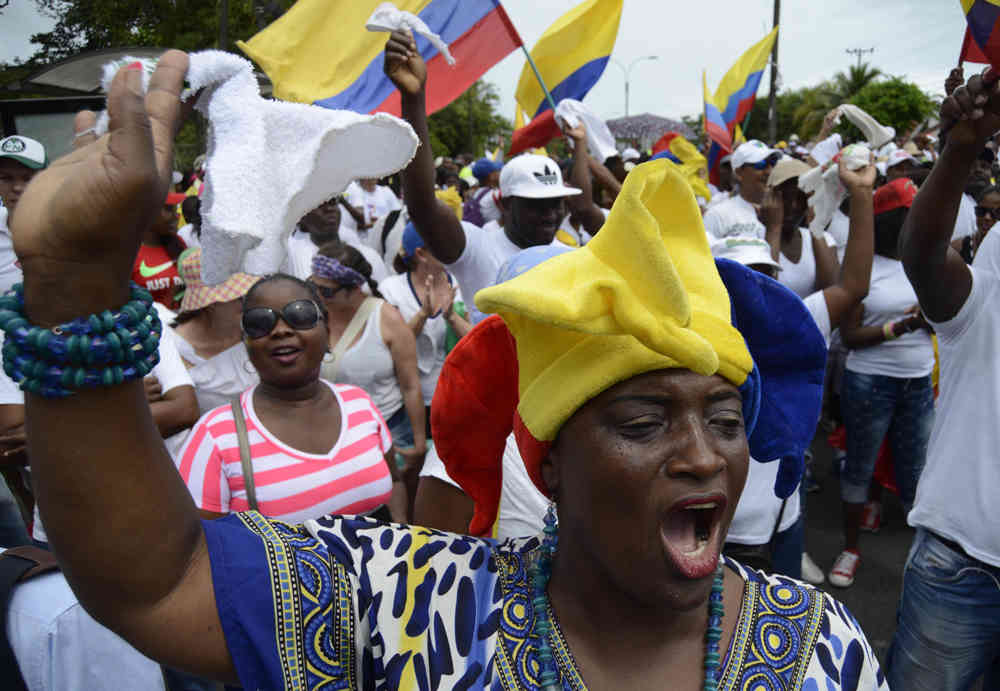 VANCOUVER—Despite a highly engaged citizenry and effective local campaigns for social and economic justice, CUPE’s partners in Colombia have reissued their call for international support in light of ongoing crises exacerbated by the COVID-19 pandemic—including the murder of labour activists and Indigenous leaders, and continuing threats of violence against those who resist unfettered corporate access […] 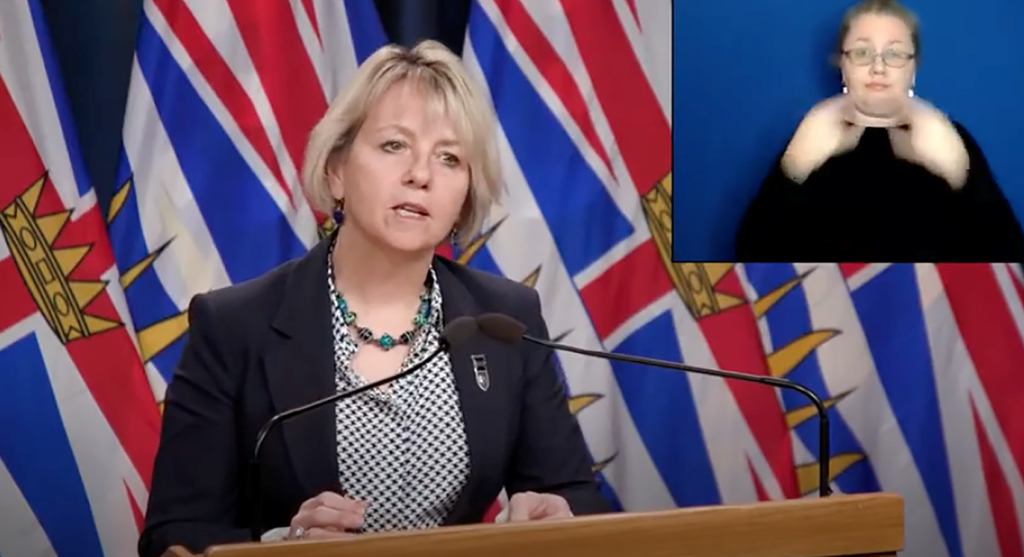 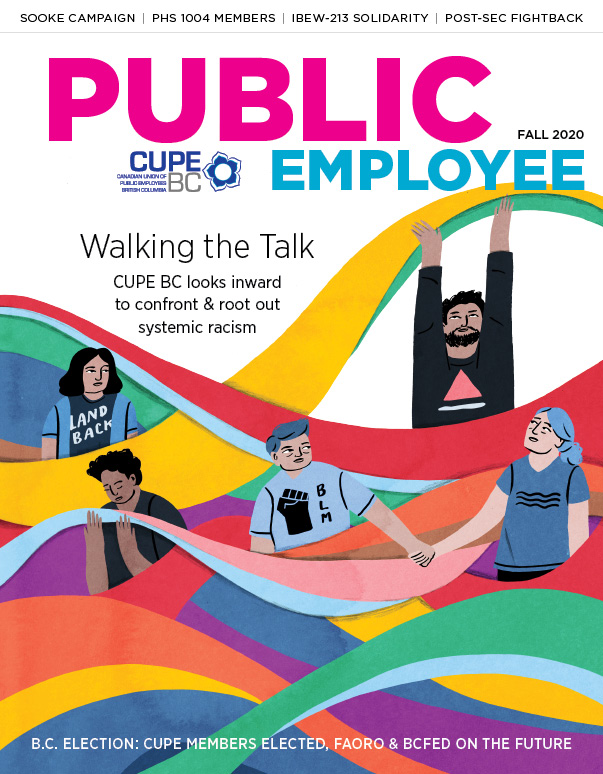 Letter to CUPE Local Presidents in BCFrom Secretary-Treasurer Trevor Davies Dear Local Presidents, CUPE BC is one of seven “employee-side” Plan Partners of the BC Municipal Pension Plan (MPP), along with other unions and organizations representing members registered in the plan. There are also four employer-side Partners appointed by the institutions listed here. Last year, […] 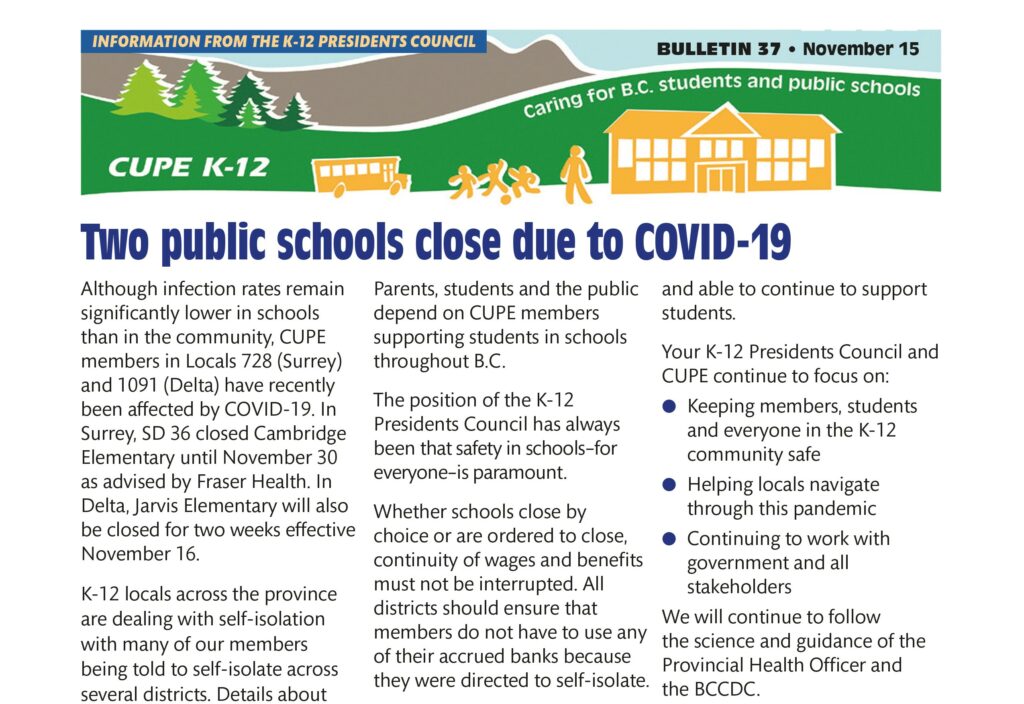 Although infection rates remain significantly lower in schools than in the community, CUPE members in Locals 728 (Surrey) and 1091 (Delta) have recently been affected by COVID-19. In Surrey, SD 36 closed Cambridge Elementary until November 30 as advised by Fraser Health. In Delta, Jarvis Elementary will also be closed for two weeks effective November […] 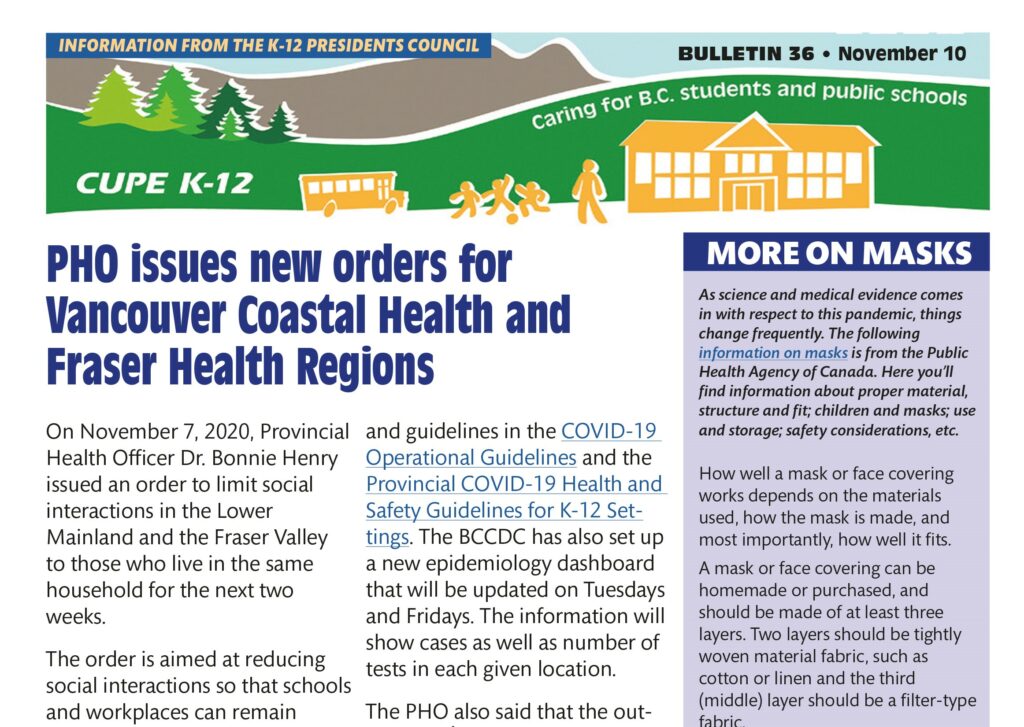 Being called upon to adjust to new changes as COVID continues, can be challenging. But if we all do our part and follow the PHO orders, hopefully we will flatten the curve in our communities and in our schools. In solidarity and safety, Warren WilliamsK-12 Presidents Council President View PDF. PHO issues new orders for […]