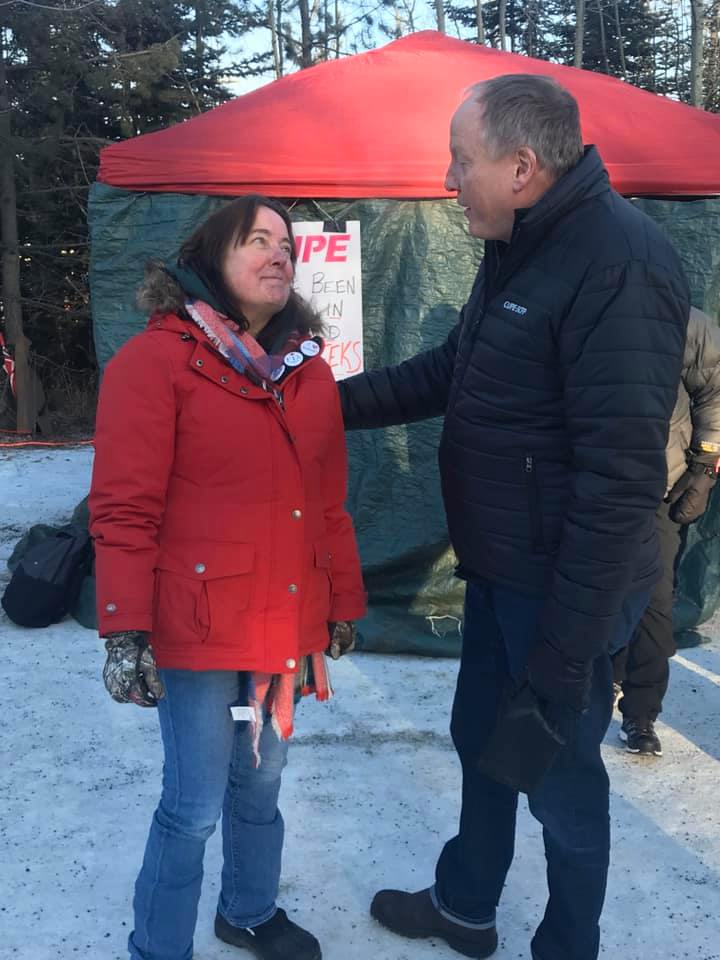 PRINCE GEORGE—Picket lines came down on Friday afternoon at the University of Northern BC as the Faculty Association strike was heading into its fourth week. CUPE members from Local 2278 representing teaching assistants, and CUPE Local 3799, representing support staff at UNBC, stood strong in solidarity throughout the job action.

CUPE 3799 President Caroline Sewell said that a lot of “good stuff” came out of standing together in solidarity. The two CUPE locals built a good relationship, members have developed friendships, and are talking about keeping in touch through monthly lunches.

“The solidarity is 100 per cent amazing,” said Sewell. She praised CUPE BC for their support including on the line support from CUPE BC President Paul Faoro, General Vice President Karen Ranalletta, and Alternate Regional Vice President North Rolanda Lavallee. The Division also gave financial support to both CUPE Locals, as did the UNBC Faculty Association.

CUPE Locals and the Faculty Association also welcomed another union on campus, Unite Here, Local 40 to the picket line for the first time in our institution’s history. Their members joined with the CUPE Locals when they did not even know if they would receive strike pay!

Sewell said that many members went above and beyond. The local’s chief shop steward set up a foodbank in her home, making food hampers and reaching out to help everyone on strike and supporting students who needed assistance. Another member, who is also a member of the Faculty Association, helped 3799 set up every morning, walked the picket line 8 hours each day to support each of her unions, and at the end of every day collected 8 – 10 bags of garbage from different sites and disposed of them.

“There are too many individual super stars to name them all,” said Sewell. “I am extremely grateful to everyone who gave so much. Solidarity is what it’s all about.”

On the last day of job action, the temperature had dipped to twenty below zero. Sewell said it was “unbearable” and had a friendly tip for picketers whose eyelashes were coated with ice and were walking a northern picket line for the first time, don’t cry.

CUPE 2278 Component 3 Chair Paige Wilson said that this job action was the first her local participated in as CUPE members. They joined CUPE in April and bargained their first collective agreement this fall, although some members had been at UNBC in 2015 during the first Faculty Association strike. Two-thirds of CUPE 2278 Component 3 members came out every day during the 16 days of picketing.

“I’m supremely proud of our members in Component 3 who came out in solidarity for the faculty,” said Wilson. “We had six picket captains who were totally on the ball, and our members were out there every day. They were dedicated and supportive.”

Wilson had strong praise for Local 3799. “CUPE 3799 members were amazing. They supported us emotionally on the line, and they helped us in so many ways and showed us how to be a union in solidarity. They were awesome.”

Many CUPE 2278 Component 3 members are also students and Wilson said the transition back to work and classes could have some challenges.

“This is a bittersweet moment because the faculty does not have a collective agreement. We will stand by them until the work is done,” said Wilson. “We are relieved to be back, but we know that the fight is not over.”