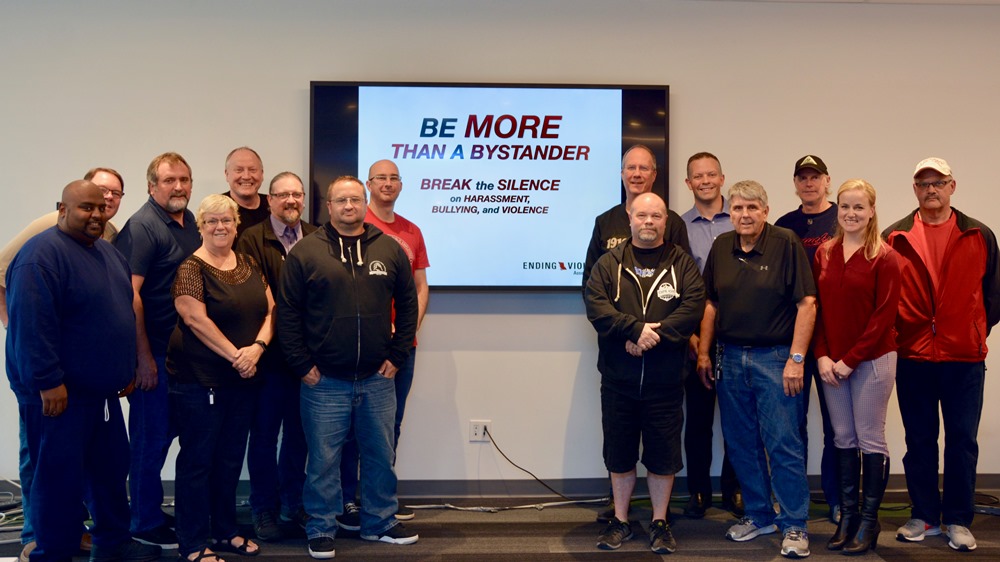 BURNABY – On Saturday, members of CUPE BC’s executive board who are men or identify as male participated in the “Be More than a Bystander” workshop aimed at ending male violence against women. CUPE National President Mark Hancock joined them for the session.

“This is an important workshop,” said Hancock. “It’s a good reminder that women bear the brunt of male-centred violence throughout our society. It’s also a good opportunity to learn some new tools we can use, as allies, to step up and speak out when we see men behaving inappropriately – in our workplaces, and in our union.”

“Be More Than a Bystander” is a campaign put together in partnership by the BC Lions football team and the Ending Violence Association of B.C. and is supported by the BC Federation of Labour and BC Centre for Women in the Trades. CUPE BC has supported this campaign in partnership with the BC Federation of Labour, but this is the first time the division has put on a workshop for executive board members.

The workshop began by reviewing the high prevalence and deeply negative effects of workplace violence, bullying and harassment, and presented statistics on the shocking frequency of workplace sexual harassment. Quoting a 2014 study, the workshop reported that 52 per cent of women have been sexually harassed in the workplace, 28 per cent have been subjected to non-consensual workplace touching, and 89 per cent of women have taken steps to avoid unwanted sexual advances in the workplace.

Workshop presenters asserted that the silence of witnesses enables the small percentage of people responsible for abusive behaviour to persist unchecked. They detailed a range of strategies bystanders should use to intercede where they observe bullying and harassment, from non-verbal interventions, to public rebukes, and interpersonal conversations, and stressed that failure to use such tactics in the face of harassing, bullying and violent behaviour is often taken as endorsement of that behaviour.

The workshop concluded with a conversation among participants about the need to make a personal investment in challenging harassing behaviour and being open to personal analysis and self-reflection on how their own privilege affects workplace interactions.

“The vast majority of violence against women is committed by men, and it’s incumbent on those of us who self-identify as men to talk seriously about the issue and do everything we can to stop it,” said CUPE BC Secretary-Treasurer Trevor Davies.