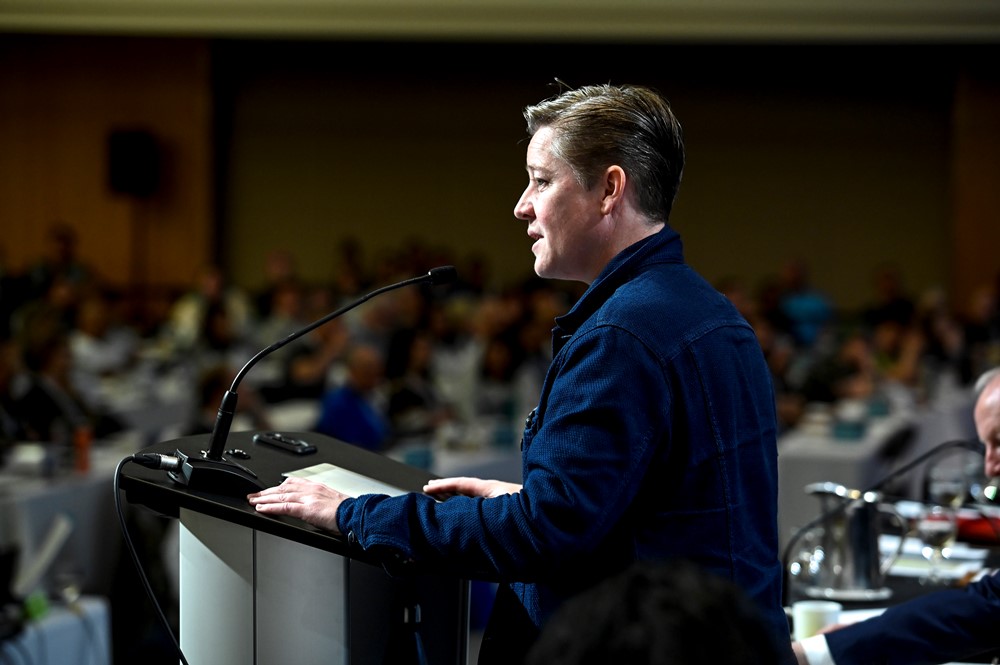 VICTORIA – Thursday’s convention appearance by award-winning author and performer Ivan Coyote had delegates in bales of laughter, tears of sadness, and silent contemplation as they gained new insight into how to become effective allies for trans people.

A renowned storyteller at conferences and festivals, Coyote read a passage from their* latest book, Tomboy Survival Guide, shared anecdotes about life as a trans person, and—in sharing lessons about appropriate language—offered a fresh perspective on social justice. The performance used ironic humour and poignant tales of oppression to debunk myths, inspire empathy, and call for change.

“I was assigned female at birth. I was supposed to be a good Catholic girl. You can see how well that turned out,” quipped Coyote. “I now identify as a non-binary trans person. I present as kind of ‘masculine-of-centre’ I guess, for lack of better words in this language.”

Coyote recalled the time they were invited to a three-day storytelling festival at a university campus in Saskatoon. They were booked into a male dormitory because of their name—only to learn that the festival coincided with an evangelical Christian basketball tournament happening at the same campus. The hallway from their room led “to the giant tiled washroom I was expected to shower in with one hundred, six-foot tall evangelical Christian athletes of the decidedly male variety,” they recalled.

“I’m pretty sure if you took out your smart phone right now and Googled ‘trans people’s nightmare,’ some version of this scenario would pop up on one of those top-ten lists on Buzzfeed.”

Coyote took this uncomfortable—and sometimes frightening—experience and related it to the workplace.

“If your members are ever required to shower or get changed into a uniform or work gear [on the job], or use a bathroom at any point in their shift, if gender neutral facilities are not provided then what this means for most if not all trans and non-binary workers is that they are not considered worthy of employment at that facility,” they said.

Coyote noted that, despite growing awareness of and support for trans issues, improvements in human rights law have also triggered a right-wing backlash of hatred—both in the U.S., where President Donald Trump opposes trans people serving in the military and wants to “erase” them by narrowly defining gender as fixed and determined by birth, and in Canada, where premiers Doug Ford and Jason Kenney used fear-mongering, transphobic bigotry to win elections.

“So please remember this the next time you are tempted to dismiss the gender neutral bathroom issue as just a very small minority clamouring for special treatment at the cost of the majority,” they said.

Coyote called for change on several fronts, the first being language.

“It is impossible to advocate or work with or support trans people if you have never been taught the words to respectfully refer to or discuss us,” they said.  “I am a trans person; I am not ‘transgendered’. There is no word such as ‘transgendered’. It doesn’t exist. Just as most of you are not ‘maled’ or ‘femaled’.”

For trans people, constantly correcting people can be exhausting and alienating. So using “cis gender” to describe yourself if you identify with your birth-assigned gender is more respectful than using words like “normal”, “regular”, or “biological”.

“I ask anyone with power or influence or seniority in a workplace to remember that how they deal with a worker changing their name or pronoun is a model for how all their colleagues will respond, and that if the shop steward doesn’t appear to be making an effort to get it right, certainly no one else will,” they said.

Coyote also called for change in popular representation of trans people. For a 13-year-old struggling with identity in Whitehorse back in 1982, the only gay-themed book in the public library was 1928’s The Well of Loneliness by Radclyffe Hall.

“The main character dies in the end. I do not recommend it for any struggling queer youth that you may know,” they said. “The mainstream loves a trans story these days, but it has to be a certain kind of trans story. But me, I’m tired of The Well of Loneliness. I don’t want to watch Boys Don’t Cry, or The Crying Game, or anything with ‘crying’ in the title at all, actually. I don’t want to watch The-Life-and- Unsolved-Death-of-Another-Trans-Woman-of-Colour.”

In an interview with CUPE Communications following their convention address, Coyote expressed gratitude to CUPE and other unions for the opportunity to share their stories.

“It’s a really incredible opportunity when you think about it,” they said.

“These delegates are from all over the province and they’re going to go back to their workplaces and there are so many ways that those people are going to go back and effect real change—even just to put it on their radar that trans people exist and give them the very basic language. It offers me an opportunity to effect slow change.”

*Trans people who identify as non-binary (or, not gender specific) often use “they”, rather than “he” or “she”.