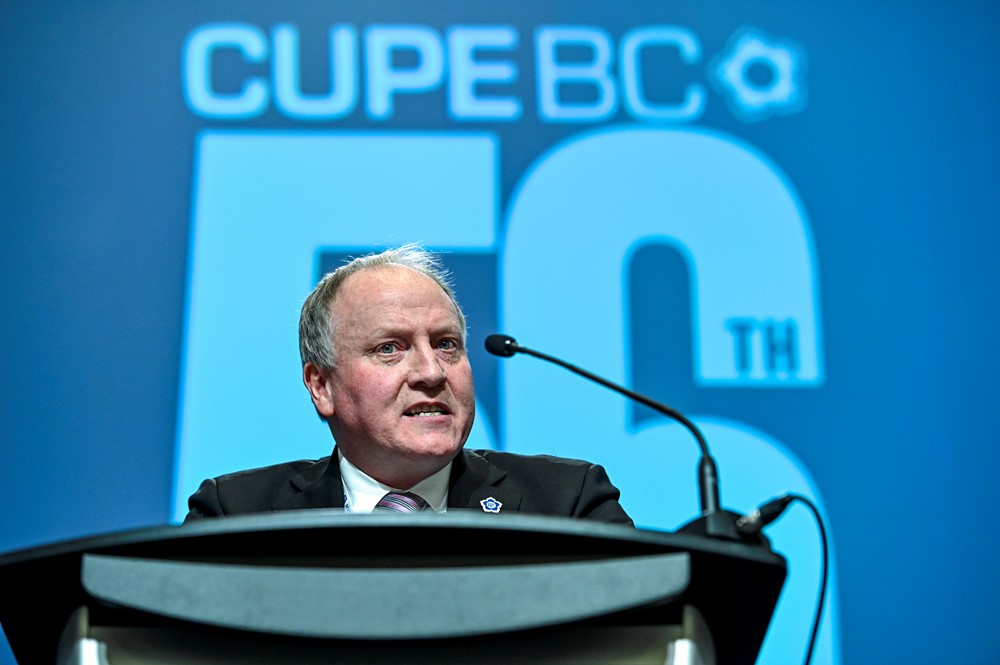 VICTORIA—CUPE BC, British Columbia’s largest union, began its annual convention on Wednesday night in Victoria with a fiery speech from CUPE BC President Paul Faoro to an audience of more than 650.

Faoro’s speech focused on the dangers of right-wing extremism masquerading as populism.

“We have a political problem,” said Faoro. “It’s the coming together of traditional conservative political parties with the so-called alt-right—the racists, xenophobes, conspiracy theorists and just plain fascists, who pollute so much of social media. The rising tide of hatred and intolerance hurts us all.

Faoro said that right-wing politicians can no longer win elections based on their actual policies.

“Every time a right-wing government is elected, it’s based in some way on a lie,” he said. “Trump, Ontario, Alberta…they can’t win based on what they really want to do. And B.C. is not immune.

“Remember ‘Tax cuts pay for themselves’?—a lie from Gordon Campbell that led directly to 16 years of hacking and slashing of services for people and a massive accumulation of riches and influence for the top 1 percent. Remember ‘Debt Free BC’?—a lie from Christy Clark that got the BC Liberals another 4 years to make the rich richer, while more kids grew up in poverty than in any other province.”

Urging delegates to take on all forms of intolerance and extremism wherever they encounter it, Faoro said that progressives have to actively confront their opponents and said, “I’ll make this commitment: Anywhere we find a politician who’s trying to divide communities, CUPE BC will take you on—and we will defeat you.”