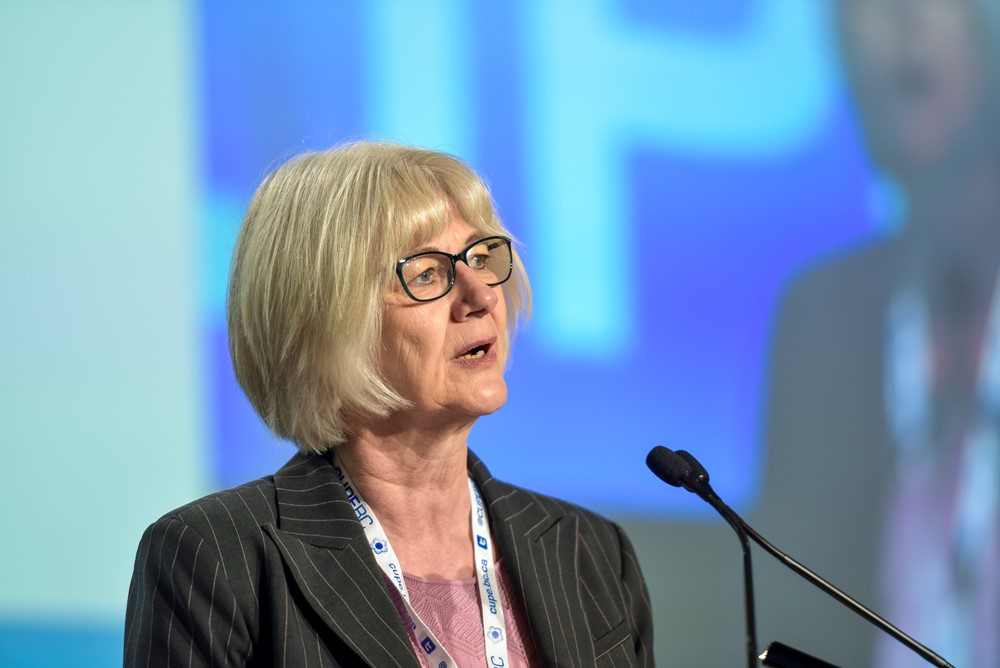 VANCOUVER – With a labour-friendly government now holding the reins of power, the time is ripe to introduce changes to employment standards and other legislation that will make life better for working British Columbians, BC Federation of Labour President Irene Lanzinger told delegates at CUPE BC’s 55th annual convention on Saturday.

Lanzinger’s comments on the need for changes to employment standards drew enthusiastic applause from convention delegates.

“We need strong rules around healthy and safe workplaces and compensation for workers – WCB, a fairer process for organizing, and changes to the Labour Relations Board,” she said.

Other changes needed include legislation to level the playing field so that workers get a fair deal, fixing the apprenticeship system, and opening more jobs to women, Indigenous workers, and persons with disabilities.

In her convention address, Lanzinger thanked CUPE members for helping to keep the labour movement strong.

“Collectively, we as the workers in this province—and all the work we do—make it possible to live a decent life,” she said, adding that the provincial labour movement continues to dedicate resources to organizing and fighting for fairness and respect.

“Our best effort in that struggle has been the Fight for $15 campaign,” she said, “And we won because of your efforts and the support of your union.”

Lanzinger also thanked delegates for their political action in helping elect a BC NDP government that shares the labour movement’s values. “In every office I went to,” she said, recalling the May 2017 campaign, “CUPE members were hard at work – quite a few as candidates and many as key members of the campaign team and as volunteers.”

Concluding her address, Lanzinger told delegates she is excited about the BC Centre for Women in Trades initiative, which will help shift the culture around male-dominated jobs and provide more employment opportunities for women.

“It is up to us to make sure that our goal of decent work, good wages, benefits and rights at work for all workers takes a giant step forward and that we make progress on new social programs,” she said.