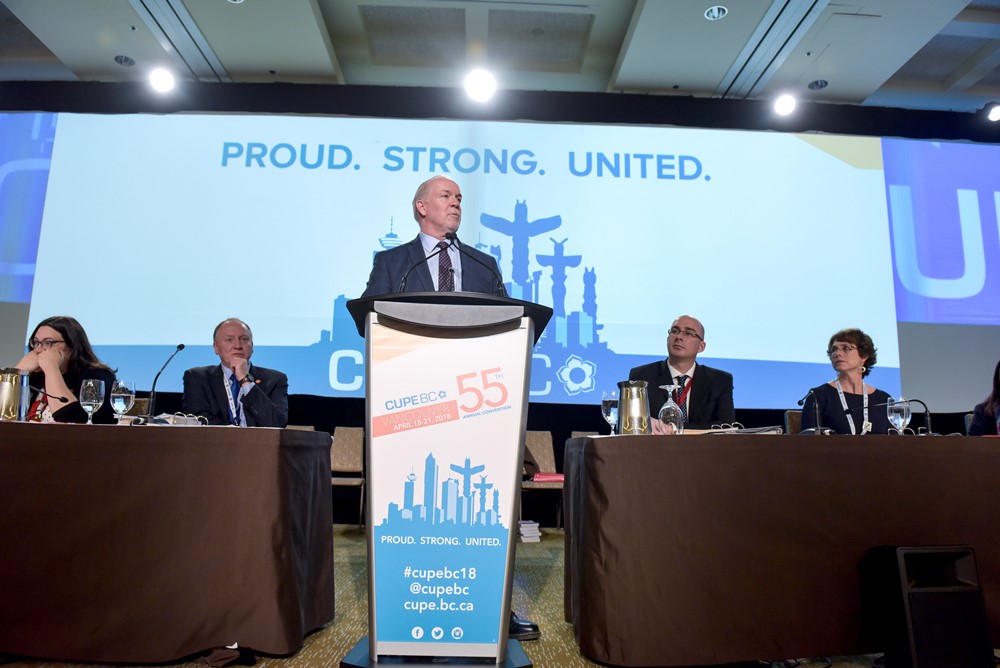 VANCOUVER – Premier John Horgan was greeted with a sustained standing ovation from more than 600 delegates and guests as he delivered the keynote address to CUPE BC’s 55th annual convention in Vancouver today.

Horgan began his speech by thanking CUPE members all across the province for their hard work on last year’s election campaign, saying that “without all your energy, dedication and commitment to our shared values I wouldn’t be standing here as your Premier today.”

He also thanked CUPE National President Mark Hancock and CUPE BC President Paul Faoro for convincing him to run for leader of the BC NDP in 2014.

After recounting many of the new government’s accomplishments—a $1 billion investment in affordable, quality and accessible child care, increased funding for K-12 education, eliminating MSP premiums, restoring bus passes for people with disabilities, reducing barriers to post-secondary education for foster kids aging out of care, scrapping discriminatory tolls on bridges, and raising the minimum wage—Horgan said, “if that’s what we can accomplish in just nine months in office, imagine what we can do by working together for four years.”

“People in B.C. work hard every day, and they deserve a government that works for them,” he told delegates. “Our government is making different choices than the former government, and those choices are about putting people first.

“We’re working to make life more affordable by improving the services you depend on and building a strong, sustainable economy that works for everyone, not just the people at the top. There’s a new government in town, and we’re guided by the values we share with the people in this room, and people all over this province—fairness, equality and opportunity.

“Our values are mainstream values; we are the mainstream,” said Horgan. “Why shouldn’t we be the government?”

Horgan’s pledge to protect B.C.’s marine environment from a potential catastrophic spill of diluted bitumen received another ovation from delegates, as did his suggestion that building a refinery in B.C. or Alberta to add value to raw resources makes better sense than risking the thousands of jobs and millions of dollars of economic activity that depend on B.C.’s aquaculture and tourism industries.

“The risks of an oil spill from increased tanker traffic are too great for our economy and environment,” he said. “You can count on us to stand up for British Columbians, our environment, and the thousands of jobs that depend on our coast.

“Instead of being told what to do by people in boardrooms in Texas, why don’t we make our own decisions in Parliament and Legislatures here at home?”

Horgan thanked ambulance paramedics from CUPE 873 for their advocacy and commitment and said the recent introduction of legislation granting presumptive coverage for occupational stress injuries, including post-traumatic stress disorder, and said the new law would never have come to reality without their advocacy.