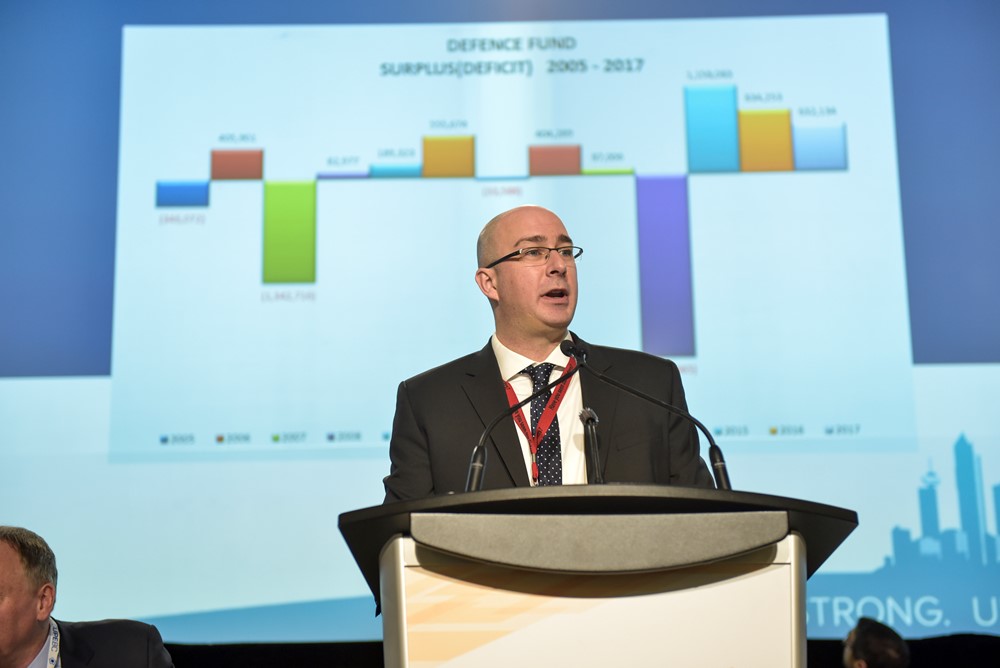 VANCOUVER – Despite challenges over the past year—including the union’s first move to a new office since 1991, a lengthy lockout at Pacific Blue Cross followed by a successful campaign to replace the PBC board, and the growth of operating expenses due to rising costs—CUPE BC remains in good financial shape, Secretary-Treasurer Trevor Davies told delegates on Friday at the union’s 55th annual convention.

“Over the last year, our Division has done some remarkable work and has also been met with some tough challenges,” said Davies. “Without the collective efforts of our CUPE family, we would not have had such a successful year. Today, CUPE BC remains a strong and healthy provincial CUPE division.”

In his convention report, Davies provided details on spending for each of the three funds (General, Defence, and Colleen Jordan Humanity Fund) a summary of daily strike pay estimates for large provincial and municipal locals, how campaign funds are used as part of the Action Plan, and how the Community Events trailer is used throughout the province. He also looked at how certain Defence Fund assets, held in both cash and equity investments managed by Seamark Asset Management, yielded returns averaging nearly 5 per cent in 2017.

“The benefit of building a large savings in the Defence Fund allows us to utilize the savings as an investment vehicle to realize meaningful returns,” he told delegates. “Should CUPE BC find itself in the future with assets in the Defence Fund of eight to ten million dollars, the investment returns alone would likely provide hundreds of thousands of dollars which could be used for a variety of projects or campaigns.”

In looking to the future, Davies discussed the internal operations of CUPE BC, including administrative and operational goals. The move to a new automated per capita program for the Division and locals, he said, has been put on hold until the General Fund has enough capacity to invest in its development—but it remains a high priority. To address the challenges of automation with CUPE worksites, he added, the Division remains committed to promoting the growth of savings and investment accounts for CUPE BC and CUPE locals.

“There will always be another employer or government trying to take away the collective rights we have fought for over many years,” Davies concluded.

“We must continue to renew our union, and to organize within our membership so we can face the challenges ahead and win. By working together, we can overcome any obstacle and continue to stand shoulder to shoulder as proud members of this great union.”